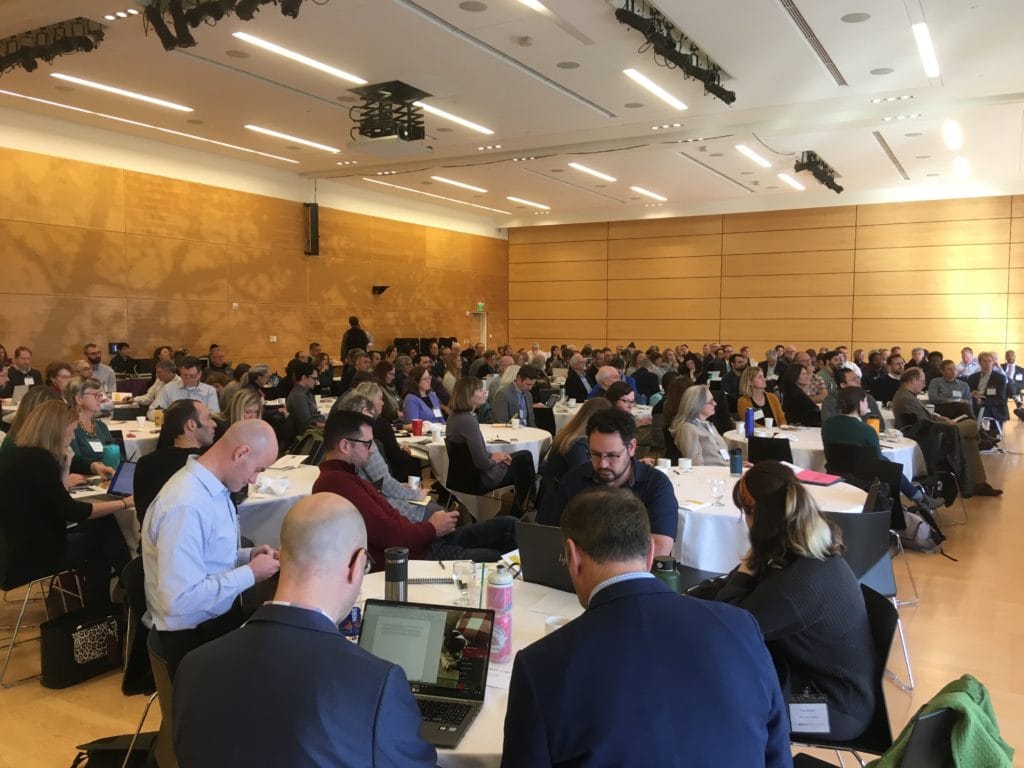 On December 2, the NW Energy Coalition hosted its Fall 2019 Clean & Affordable Energy Conference on the campus of the University of Washington in Seattle.  Conference guests participated in discussions and presentations exploring the region’s upcoming transition to an electric system that by mid-century will be almost entirely free of fossil fuel resources.  Special focus was placed on the role the Bonneville Power Administration can play in facilitating the transition by promoting energy efficiency and helping the region integrate new renewable resources.  Another focal point was the expansion and integration into the electric system of customer-side resources that can increase system efficiency and minimize the need for new generation. 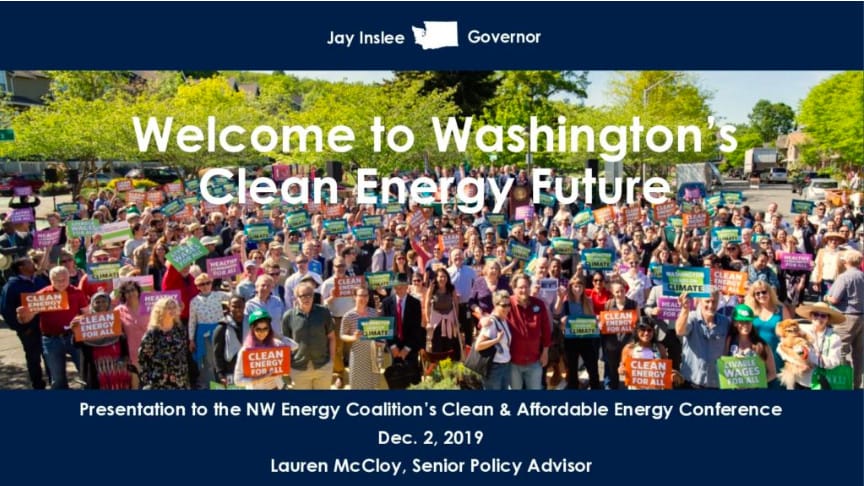 The conference’s opening remarks were delivered by Lauren McCloy, Senior Energy Policy Advisor to Washington Governor Jay Inslee, who described efforts currently underway by state agencies to implement the extensive package of energy and environmental legislation enacted in the 2019 legislative session.  The flagship Clean Energy Transformation Act (CETA) phases out coal-fired electricity by the end of 2025 and requires utilities to achieve a carbon-neutral standard by 2030 with at least 80% of requirements met by clean energy resources.  CETA also adopts a policy of transitioning to 100% clean electricity by 2045.

The bill, which recognizes hydropower as a renewable resource, also includes planning requirements for utilities, safeguards for rates and reliability, and provisions to support the expansion of efficient energy markets, the development of a clean energy workforce, and protections for low-income customers and other vulnerable communities.  CETA is complemented by additional bills in the governor’s package that address buildings, appliances, and transportation.  As extensive as the package is, McCloy emphasized there is still work to be done and cited likely efforts in the next session to enact clean fuels and zero emission vehicle legislation.

Keynote speaker, Alison Silverstein, challenged attendees and the region to reconsider how we think about electric system capacity and the way in which customer needs should be met going forward.  Citing the rise of low-cost renewable resources, expanding customer-side capabilities, improved energy markets, and technologies that enable utilities to integrate them, Silverstein painted a picture of an emerging energy system that is nimble, flexible, and increasingly less dependent on “elephants” – large baseload power plants whose economics are inexorably deteriorating. 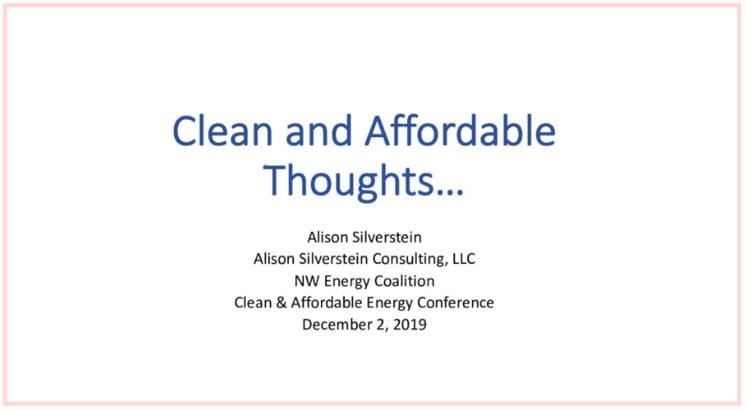 Not content to swipe at one paradigm, Silverstein also took aim at another.  Moments after a discussion of Washington’s CETA bill that will transition the state to 100% clean electricity by 2045, Silverstein asked if that’s really such a good idea.  Her point was that the funds required to achieve the last 10-20% of emissions reductions might be more productively spent in India, Africa, and other developing regions where the innovation curve is steeper.  Silverstein did not discuss mechanisms for transferring the necessary resources or how to build the political will to do so.   She closed by emphasizing that there is no single market-based silver bullet for minimizing greenhouse gas emissions.  Codes, standards, and mandates must all be part of the solution. 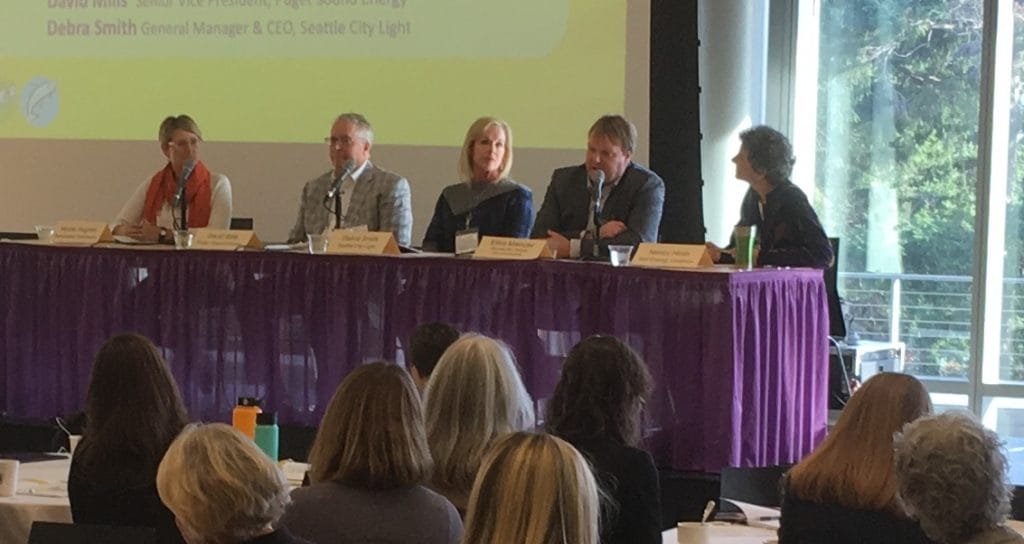 The Bonneville Power Administration (BPA), which provides nearly three-quarters of the electricity consumed in the Northwest, will play a critical role in helping the region transition to clean resources and embrace new renewable resources and expanding customer-side resources.  But, change will be required both within BPA and within the energy marketplace at large according to the panelists.

The range of panelist responses to moderator Nancy Hirsh’s initial question about how BPA can help in the transition illustrated the complexity of the challenge.  Seattle City Light CEO, Debra Smith, noted that fundamental changes to BPA and utility business models will almost certainly be required and they come laden with issues relating to equity and affordability. Puget Sound Energy senior vice president, David Mills, emphasized that the full integration of distributed generation and other customer-side distributed resources raises control issues that may fundamentally change or make more complex relationships between utilities and customers.  And, he pointed out, even if those issues and can be resolved, the region faces transmission challenges and, due to the retirement of coal-fired power plants, will have to look at some added utility-scale generation. Renewable Northwest executive director, Nicole Hughes, said that, while technologies that make demand manageable and help integrate intermittent resources are coming to the fore, business issues like long-term contracts and planning processes and governance, which focus on single utilities rather than the region as a whole may get in the way of innovation.

BPA administrator, Elliot Mainzer, tried to address some of these concerns while adding a few of his own.  Mainzer acknowledged the need for greater flexibility in the design of BPA products and the development of new markets for surplus energy.  He also emphasized the need for BPA’s transmission business to add services that can help get more variable resources on to the system and to repurpose transmission capacity from Montana.  He said these efforts will need to be complemented by public/private initiatives that may require new business models and new financing incentives.  Mills concurred, citing the need for collaboration and suggesting that diversification could include new market providers.  Debra Smith observed that, while these changes might be necessary, smaller utilities will feel some anxiety about possible changes to a relationship with BPA that have served them well.

Capacity and resource adequacy was also a subject on the minds of panelists.  Nicole Hughes called it the single biggest challenge facing the region in the next five years.  And Mills and Mainzer pointed out that, before figuring out how to address adequacy and capacity challenges, we need to more clearly understand them.  Mainzer observed that we need more accurate measures of resource adequacy and Mills pointed for the need for bringing clarity to the requirements resulting from Washington’s enactment of CETA.  Panelists also agreed that the development of bulk storage and enhanced demand response capabilities should be key elements in addressing adequacy and capacity challenges.

The Future of Decarbonization in The Northwest:  Two Studies 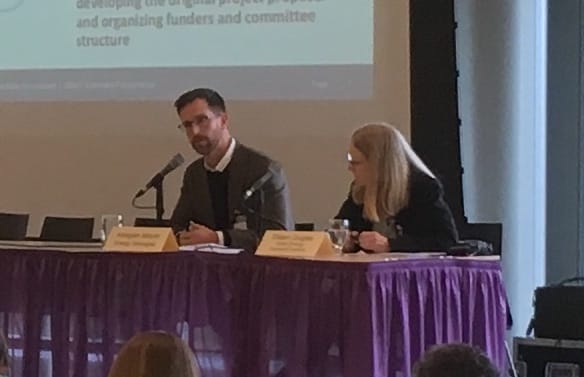 Keegan Moyer’s company, Energy Strategies, and Eileen Quigley’s Clean Energy Transition Institute (CETI) are two of the organizations that have been examining the challenges the Northwest will have to meet to achieve a radically decarbonized electric system. One of the strategies already being implemented is expanded system integration through the development of new markets that connect regions and players in order to achieve increased efficiency. 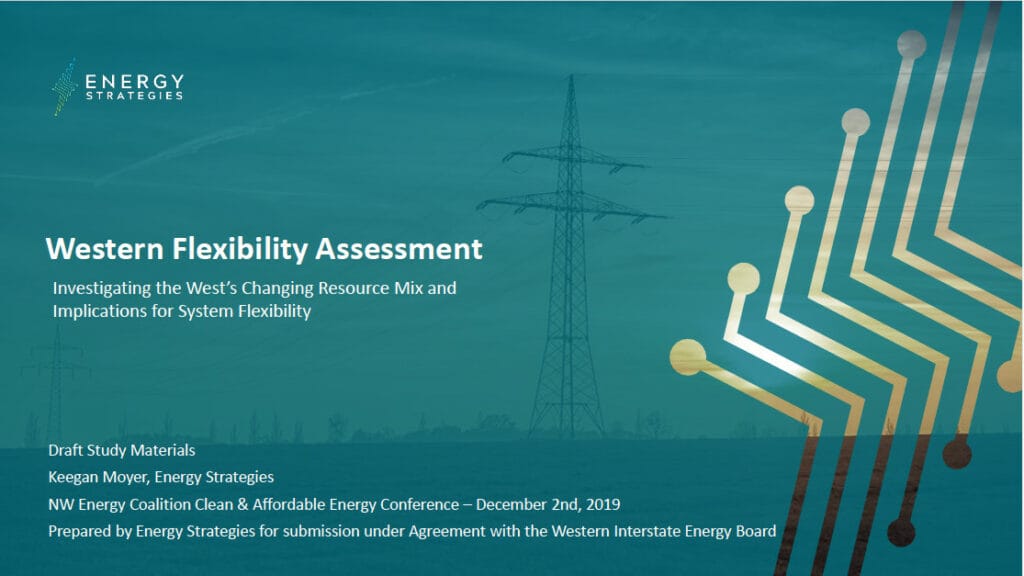 Moyer’s firm recently completed a study titled,  “Western Flexibility Assessment:  Investigating the West’s Changing Resource Mix and Implications for System Flexibility”.  The study, which takes into account impending closures of seven coal-fired power plants, explores the trend of regional integration and its value and implications.  It finds that: 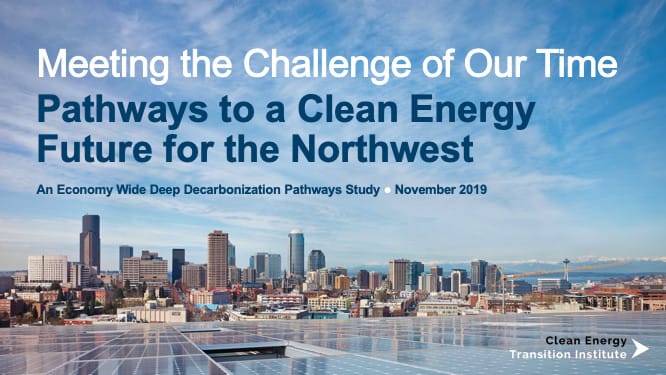 Eileen Quigley presented the results of the Northwest Deep Decarbonization Pathways Study and explored some of the challenges associated with achieving deep decarbonization. The NWDDP study is the first to examine the Northwest as a whole, across multiple sectors, while also taking into account economic and institutional factors that constrain the region’s range of options. The states represented in the study are Washington, Oregon, Idaho, and Montana and the sectors include residential and commercial buildings, industry, transportation, and the electric system.  The study finds that, in order for the region to achieve an 86% reduction in energy-related CO2 emissions by 2050:

The study anticipates these changes taking place as overall energy consumption drops by more than a third despite population increases.  That’s because gasoline use will nearly vanish while pipeline gas consumption will decline by half.  On the other hand, electrification of the building and transportation sectors will cause electricity consumption to grow by half.  The study concludes that the cost of the transition will equivalent to approximately 1% of GDP.

Reinventing The Grid With Customer-Side Resources

Leia Guccione, Managing Director of the Rocky Mountain Institute’s Electricity Program, moderated two afternoon panels exploring the implications and challenges of emerging customer-side energy resources.  In a series of papers titled, “The Harmonious Grid”, the NW Energy Coalition has discussed how existing and emerging customer-side generation, storage, energy efficiency, and load management capabilities may soon be integrated into the electric system so that electricity demand can be managed by utilities in a fashion similar to the way generation resources are today. 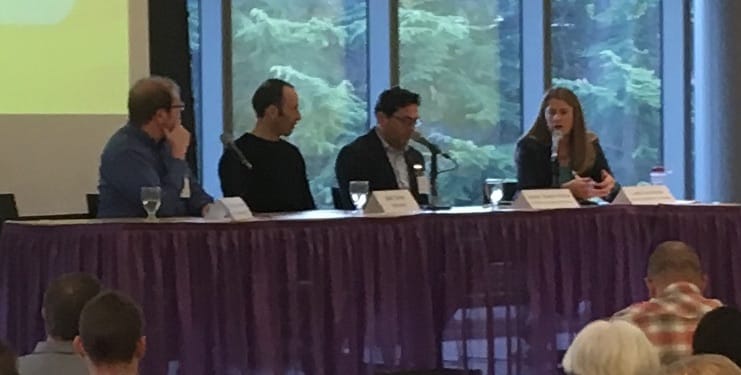 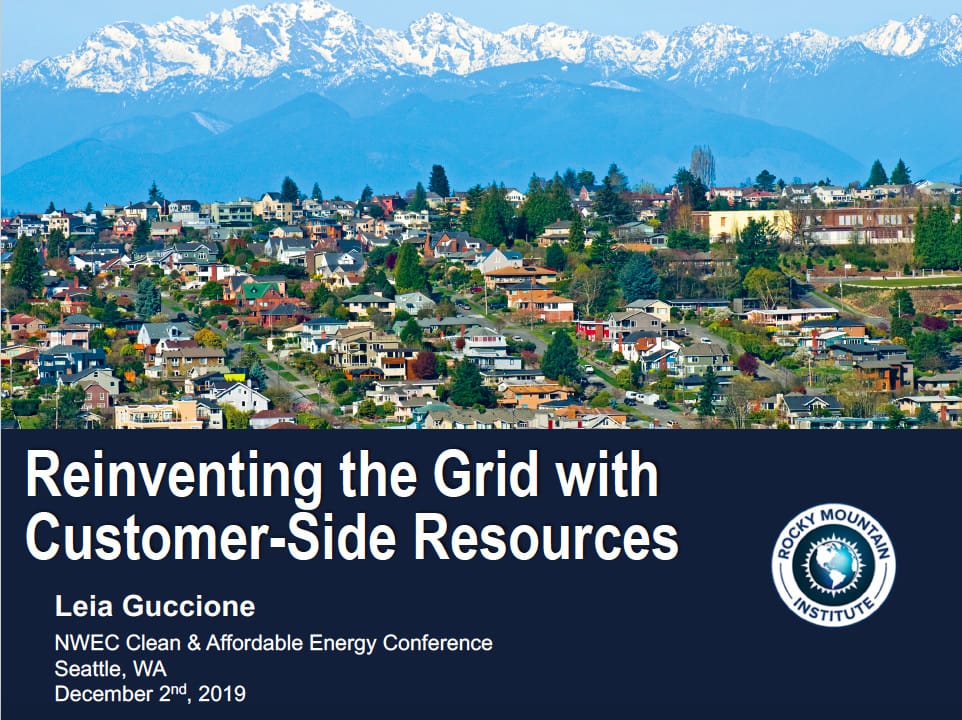 The first of the two panels examined a range of customer-side resources that can be integrated into the electric system and the economic incentives for doing so.  Guccione led off by pointing out that, while electricity generation costs have been in sustained decline, retail prices for electricity have continued to climb largely because of increased costs for transmission and distribution.  According to Guccione, the ongoing increase in electric rates creates significant incentives for utilities to pursue increased grid integration and embrace customer-side innovation. 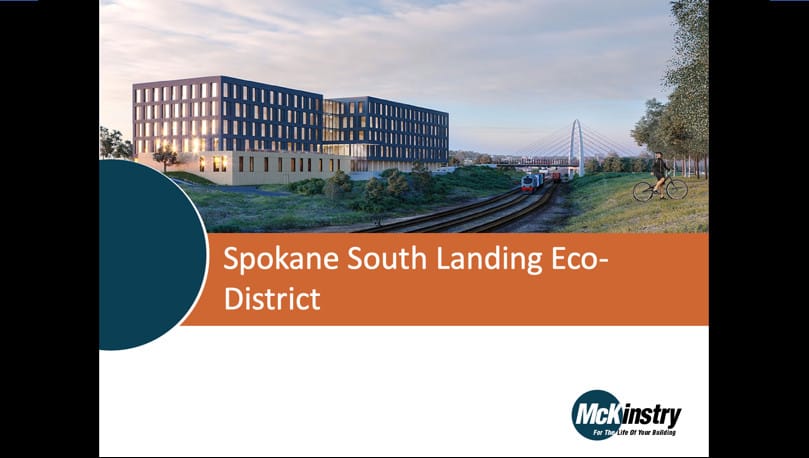 Seth Davis, Senior Manager at McKinstry, made the effects Guccione described tangible when he described the Spokane South Landing Eco-District project to construct a commercially viable building that uses minimal energy and that interacts with the utility through the meter.  Using a series of technologies including thermal storage, an electric boiler, an air-to-water heat pump, a heat recovery chiller and water-cooled chiller, McKinstry was able to significantly reduce peak demand in both summer and winter. 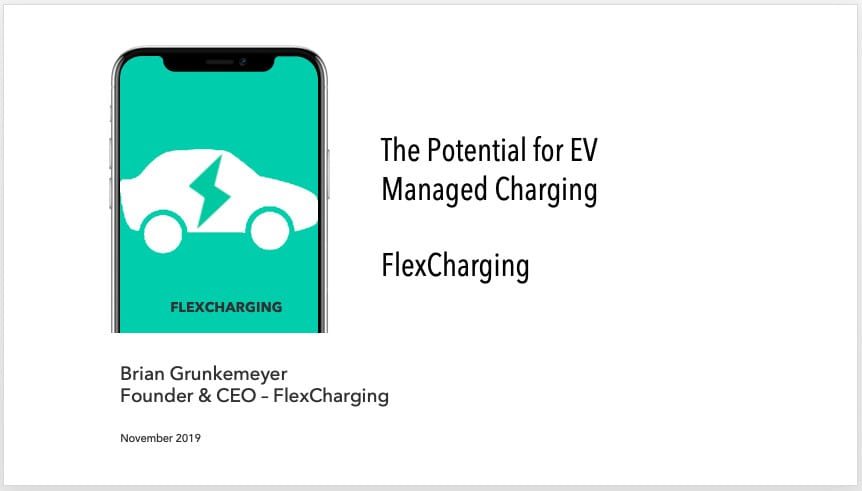 Brian Grunkemeyer, founder and CEO of FlexCharging, described how the managed charging of electric vehicles through the use of time-of-use-rates can also mitigate peaks and avoid costs in residential demand on a scale that he put at over $13 billion annually.   Jason Salmi Klotz, Manager of Regulatory and Policy Strategy for Portland General Electric, provided a utility 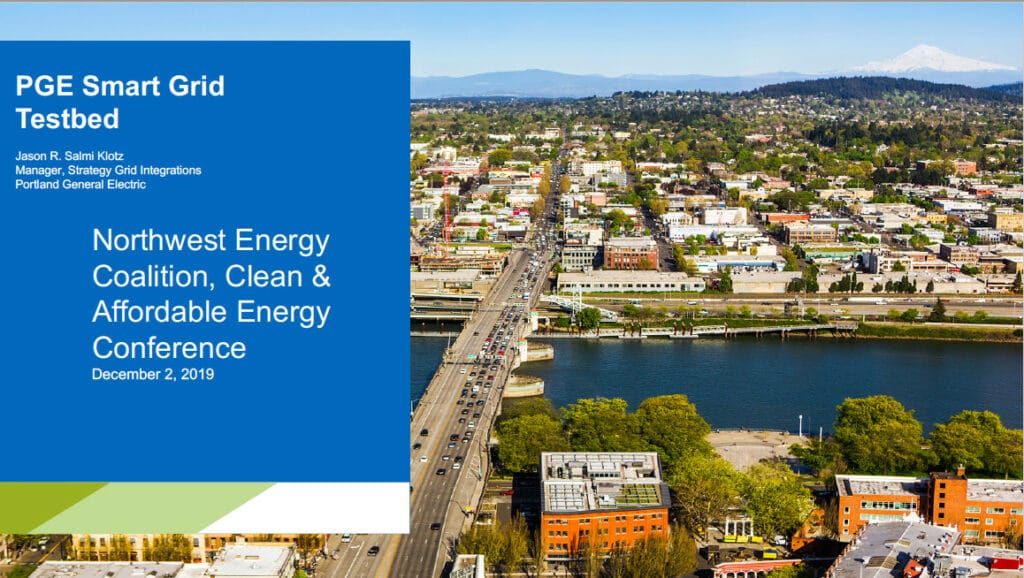 perspective on the challenge and described a series of existing and planned products that PGE is developing to take advantage of customer-side resources.  These include: 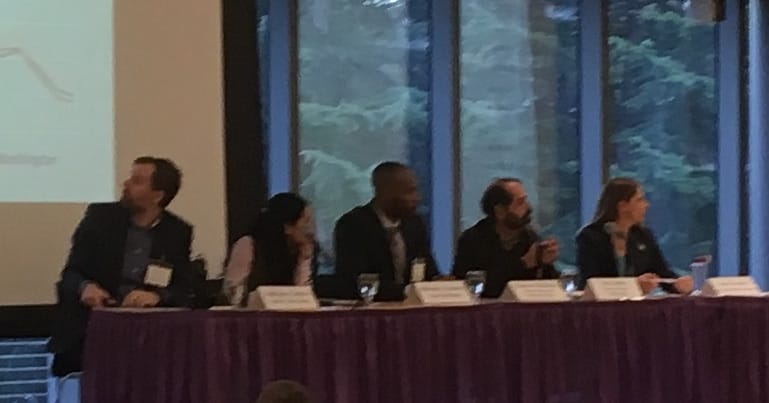 The rise of customer-side resources that can provide services to the grid is turning consumers of electricity into “prosumers”, creating the need for new kinds of business relationships between utilities and their customers.  And the need isn’t confined to the challenge of developing business models that adequately incent and reward customers for services they provide to the grid.  There are also issues of control and privacy that must be navigated.  And, as is true with any systemic change, equity issues must be effectively addressed. 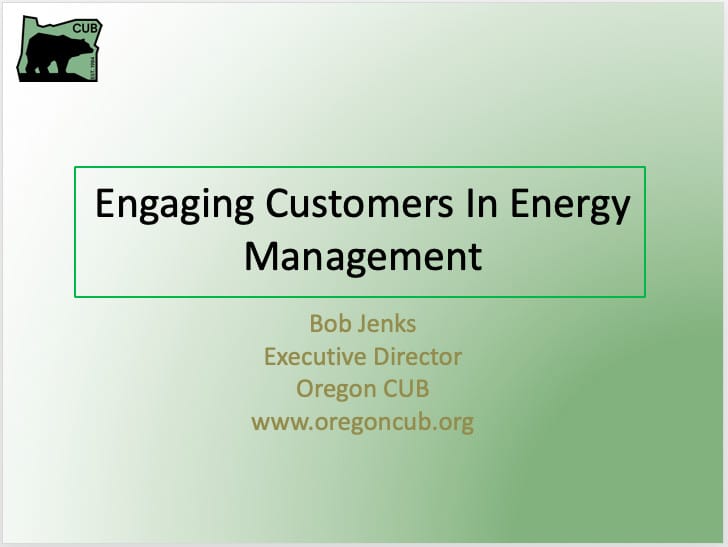 Among affluent customers who can afford technologies like home energy management systems and grid integrated water heaters, there is the problem of inertia and the difficulty of finding affordable ways to motivate them to turn over a degree of control to their utilities.  That problem also exists in low-income communities and, added to it, is the problem that many people in those communities won’t be able to afford the new and enhanced technologies that will be required for utilities to effectively manage demand.

Strategies for addressing these challenges include utility-sponsored financial incentives supported by high-visibility promotional campaigns, empowering utilities to sell or lease various technologies to customers on terms that mitigate up-front costs, or, at an extreme, enacting policies that simply require compliance.  None of these is a silver bullet.  Even the best-funded campaigns to win voluntary compliance with utility programs rarely succeed in persuading more than a third of qualified prospects to sign up.  And approaches that would expand the range of fields in which utilities can do business or that would involve legislative mandates would be politically challenging.

In summary, as new as many emerging customer-side technologies are, their development is far out ahead of the development of the policies, rules, and practices that will eventually be necessary to assure their adoption on a scale that can deliver significant system benefits and in a way that is politically palatable to policymakers and the people who elect them.

Join us for the next conference in spring 2020

Thank you for catching up on what happened at the fall 2019 Clean & Affordable Energy Conference and, if you found the discussions interesting and valuable, please consider registering for the spring 2020 Clean & Affordable Energy Conference, which will take place on May 7, 2020 in Missoula, Montana.  Watch this space for more information or contact Outreach Manager, Kat Plimpton at the Coalition.