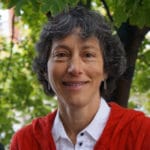 The Washington Department of Commerce maintains a 2021 State Energy Strategy web page where the committee’s activities can be followed.  All committee meetings are open to the public.  Members of the committee include: