In 1975, an NWEC founding member, the Natural Resources Defense Council, released its “Alternative Scenario” for the Northwest energy future. The Alternative Scenario was the first compelling demonstration of the enormous contribution that energy conservation and new renewable resources could make to meet the region’s electricity needs. It convincingly argued six years before the collapse of the Washington Public Power Supply System (WPPSS) that the ambitious nuclear and coal construction program undertaken by the region’s utilities was not only exorbitantly expensive but unnecessary. 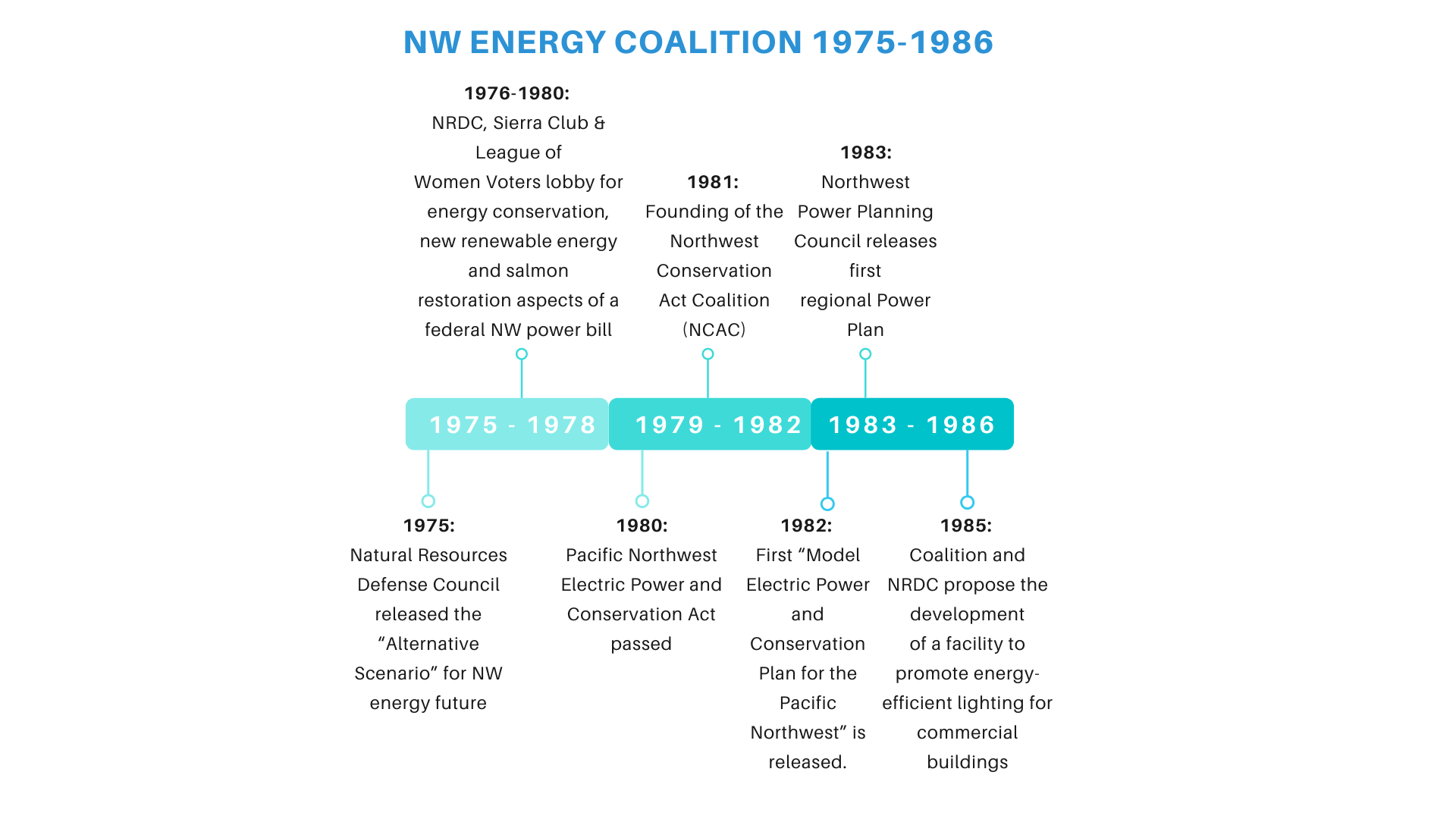 Throughout the five-year (1976-1980) battle over the passage of the NW Power Act, groups that would become the founders of the Coalition – including NRDC, Sierra Club, and League of Women Voters – lobbied effectively for what became essential features of the final bill, including: a strong preference for conservation and new renewable resources, a politically accountable planning body, mechanisms that accurately reflect the long-term costs of new energy, a mandate to seriously consider the environmental costs of new energy resources, and elevating fish & wildlife recovery as a priority for the Bonneville Power Administration.

These groups saw that a regional advocacy organization would be needed to keep the Bonneville Power Administration focused on the letter and intent of the new law. In 1981, about 25 organizations, mostly environmental groups but also several unions, including United Food and Commercial Workers, formed what was then called the Northwest Conservation Act Coalition. Subscription sales of the Coalition’s first regular publication, the Northwest Conservation Act Report, kept the fledgling Coalition afloat during its early years.

In 1984, an NCAC study, “Perfecting the Plan,” found that the Council’s estimates of efficiency potential in commercial lighting were significantly understated. Fiver years later, after an NCAC/NRDC lawsuit and formal petition for rulemaking, the Council adopted new commercial efficiency standards that incorporated many of the savings identified by NCAC.

In 1985, NCAC and NRDC jointly proposed the development of a facility to demonstrate and promote energy-efficient lighting for commercial buildings. With the cooperation of Seattle City Light, the Bonneville Power Administration, and others, the Seattle Lighting Design Lab opened its doors in December 1989. Subsequently, an Integrated Design Lab was opened in Boise, ID.

In 1988, the Coalition supported the successful campaign, of Friends of the Earth, to get the Northwest Power Planning Council to set aside about 44,000 miles of Northwest streams as critical habitat for fish and wildlife.

By the end of the 80s, the Coalition had convinced utility regulators in all four Northwest states – Montana, Idaho, Oregon, Washington – to require investor-owned utilities to do least-cost plans that prioritized cost-saving energy efficiency. These least-cost investment plans closely mirrored the Regional Plan’s process, which the Coalition played a central role in developing. Conservation was the cornerstone of most of those plans, many of which the Coalition was instrumental in writing. 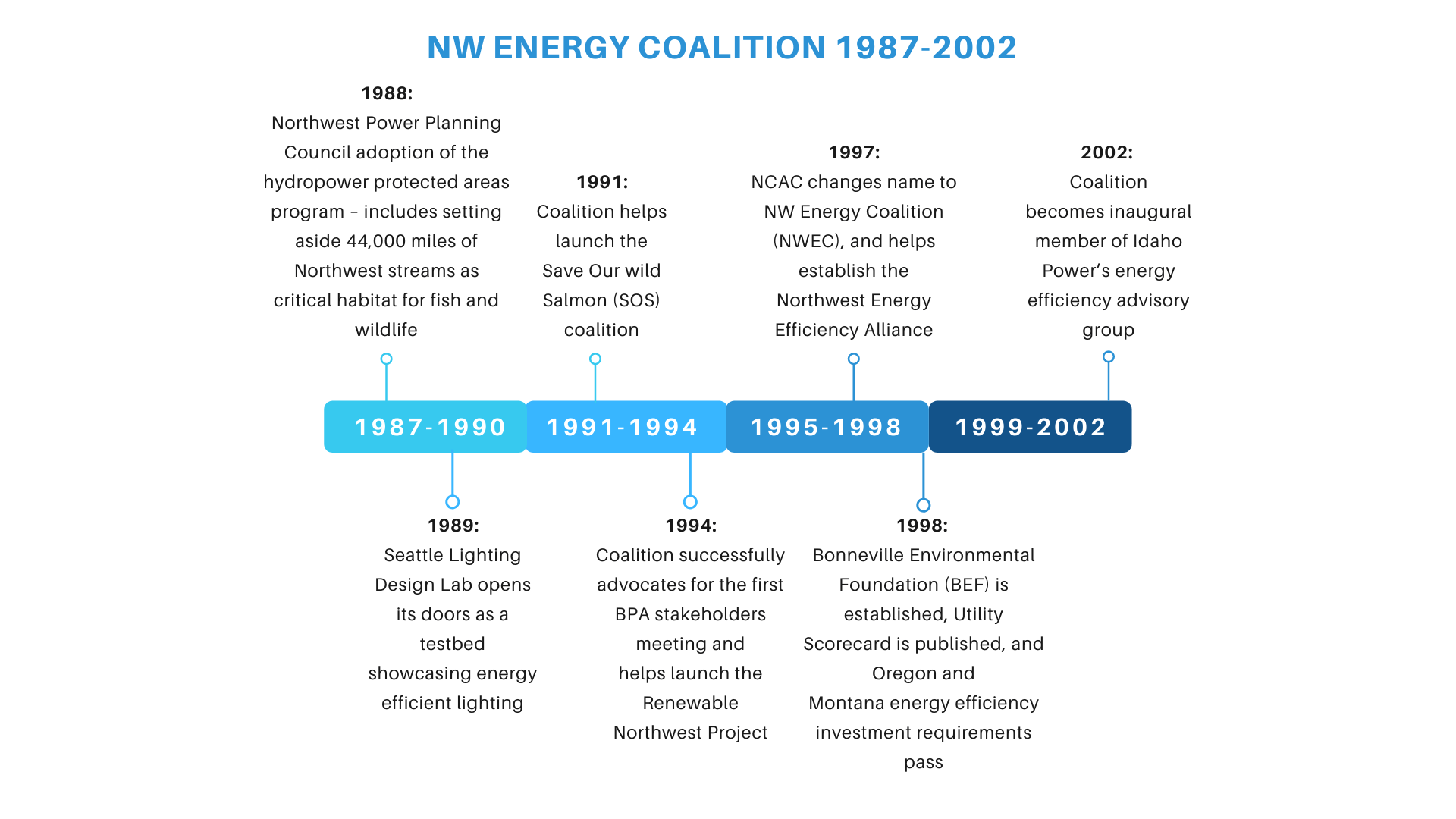 In 1991, NCAC helped launch the Save Our Wild Salmon (SOS) coalition to restore Columbia Basin wild salmon and steelhead species now on the federal Endangered Species List – due to primarily the existence and operation of federal hydropower dams.

In 1994, as BPA responded to the electricity deregulation follies by becoming more “business-like,” the Coalition organized a convention to elevate stakeholders’ concerns – clean energy and wild salmon advocates, low-income agencies, and other members of the public who actually own the federal agency. This resulted in the convening of the first-ever BPA shareholders meeting.

In the same year, the Coalition created the Renewable Northwest Project (RNP). RNP spun off into a separate organization three years later and has been a principal force in bringing more than 8,000 megawatts of wind, solar, and other new renewable power online in the Northwest.

The mid-1990s brought impressive policy advances in energy efficiency, renewable energy, consumer/ low-income protection, and intensified activity around the recovery of salmon and steelhead endangered by the federal hydro system. The Coalition grew to encompass more than 100 organizations, including several public and investor-owned utilities. Highlights included:

In 1997, the organization’s name was changed to the NW Energy Coalition (NWEC), reflecting a mission that had transcended the now historic Northwest Power and Conservation Act. 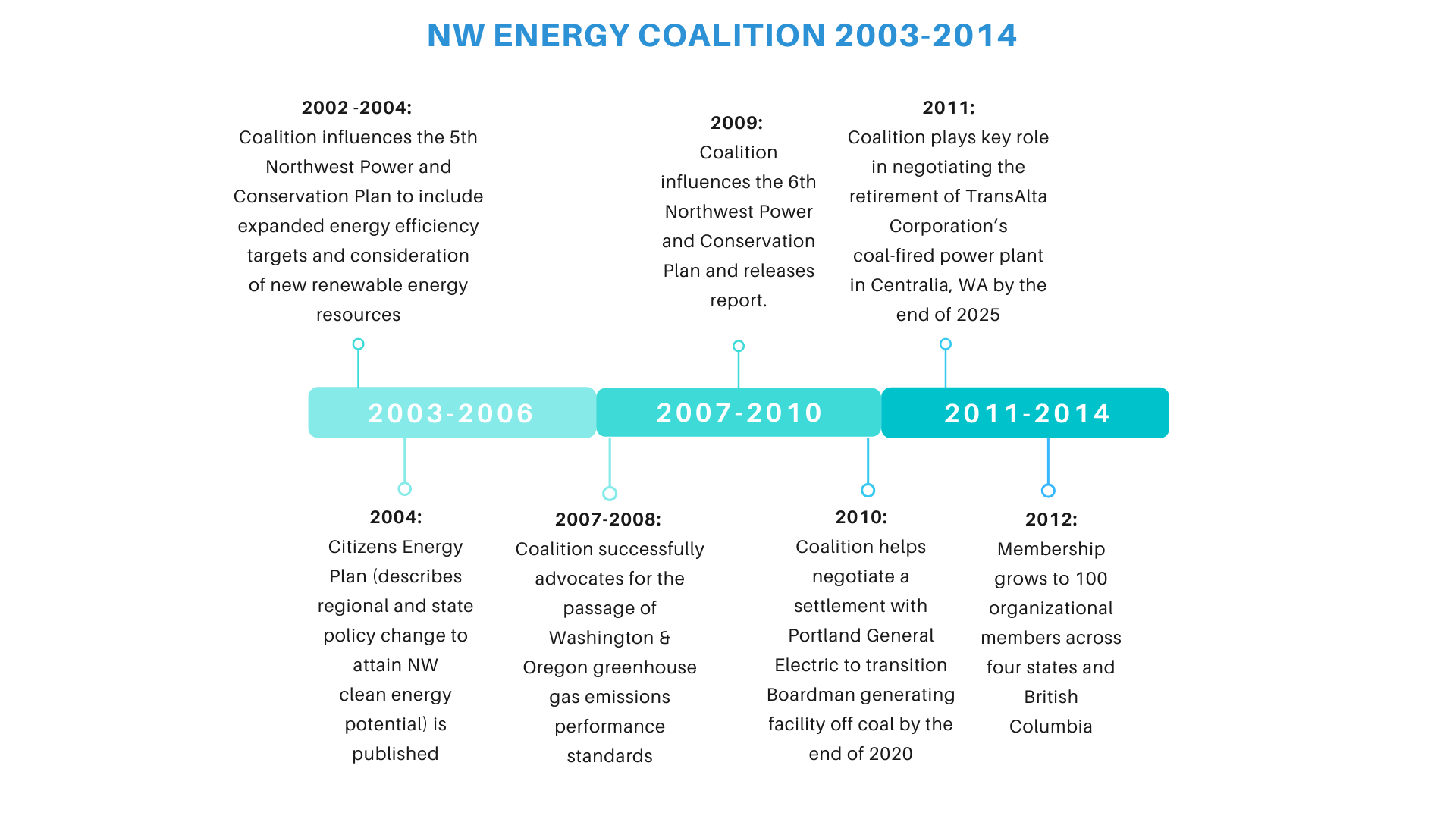 In the early years of the 21st century, the Coalition released a series of documents that have set the stage for most of its current and future endeavors. The 2002 Tellus Institute Study, “Clean Energy Options for the Pacific Northwest,” showed that the region could meet all potential load growth and replace the power from the four Lower Snake River dams, which threaten salmon populations, with bill-reducing energy efficiency and competitive renewable electricity. Following the release of the groundbreaking Tellus study, the Coalition developed the Citizens Energy Plan that described regional and state policy changes needed to attain the Northwest’s clean-energy potential. The Plan guided outreach and messaging on BPA’s Regional Dialogue and on the Power and Conservation Council’s draft Firth Northwest Power and Conservation Plan. From the Citizens Energy Plan flowed the Energy Matters campaign, initially aimed at influencing the Bonneville Power Administration’s “Regional Dialogue” on its future power supply role; and the Power Council’s Fifth Power Plan.

When the final Fifth Plan came out in 2004, it adopted Tellus’ assessment of the role energy efficiency could play and its call for meeting almost all increased needs with efficiency and renewable energy.

Through participation in policy workgroups, extensive outreach and communications, and engagement with allies, the Coalition helped create the most forward-thinking Northwest Power Plan thus far.

The Coalition’s intervention in Idaho Power’s rate case in 2002, resulted in an Idaho Public Utilities Commission order requiring Idaho Power to establish an energy efficiency advisory group for the first time in the company’s history.

In 2007 and 2008, the Coalition worked to pass the Washington and Oregon emissions performance standards.

The Coalition released “Bright Future: How to keep the Northwest’s lights on, jobs growing, goods moving and salmon swimming in the era of climate change” in 2009. The report details how the Northwest can:

In 2010, the Coalition and its allies helped negotiate an agreement with NWEC member utility Portland General Electric to transition its Boardman generating facility off of coal by the end of 2020. In 2011, the Coalition helped negotiate the retirement of TransAlta Corporation’s Centralia, Washington coal-fired power plant. The agreement established funding for worker transitions and local economic development and energy efficiency. 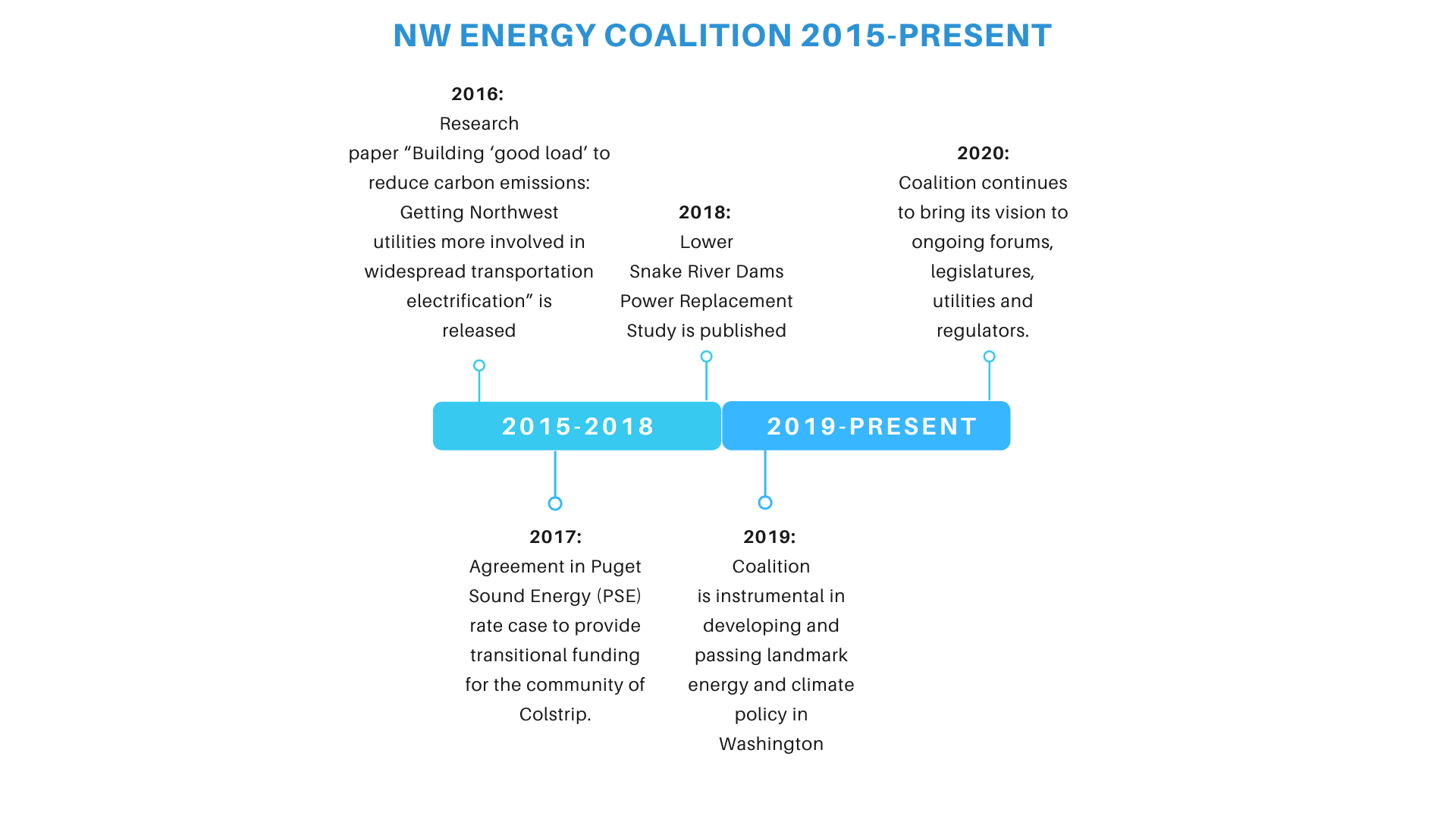 In 2017, a settlement was reached in Puget Sound Energy (PSE) rate case addressing under recovered costs from operation at the Colstrip Power Plant in Montana, and setting aside funds for decommissioning and clean-up of the plant’s coal-fired generating units. The settlement also provided $10 million in transitional funding for the community of Colstrip.

In 2018, the Coalition released the Lower Snake River Dams Power Replacement Study. The study demonstrated the feasibility of replacing the power and energy services provided by the four Lower Snake River Dams with a portfolio of clean and renewable resources that support a reliable and adequate regional power system while minimizing increases to greenhouse gas emissions.

For decades, the Coalition has been an active participant in a national information exchange sponsored by the National Consumer Law Center and in 2019 the Coalition co-authored a national white paper titled “Reversing Energy System Inequity: Urgency and Opportunity During the Clean Energy Transition.” The document explains how, as we transition to a cleaner electric system, we can address inequities that force some people to choose between paying utility bills or buying medicine and food.

2019 was a landmark year for energy and climate legislation in Washington, and the NW Energy Coalition was instrumental in the passage of a number of bills in the state legislature.

The Coalition collaborated with members and allies to help pass this suite of bills signed into law by Washington State Governor Jay Inslee.

Today, the NW Energy Coalition continues to bring its vision to the ongoing regional forums, legislatures in all four states, utilities and their regulators, decision-makers, ratepayers, and all the people of the Northwest.

For a detailed list of important dates, take a look at our NWEC Timeline.