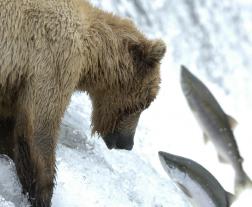 The Seattle Times Editorial page weighs in on Judge Redden’s ruling. U.S. District Court Judge James Redden issued a 24-page ruling Tuesday that slapped down another federal plan for operating the economic interests of the Columbia and Snake rivers, while working to save endangered fish.

U.S. District Court Judge James Redden ruled today that the NOAA Fisheries Service again failed to produce a legal and scientific plan to protect imperiled Columbia-Snake River salmon from harm caused by the operation of federal dams on the Columbia and Snake rivers. Today’s court action – which has been ongoing for almost a decade – is a landmark decision for fishing and conservation groups, the state of Oregon and the Nez Perce and Spokane tribes, all of which have opposed the federal biological opinion, or BiOp, in court.

A group of salmon advocates is siding with wind developers in their battle against system operator Bonneville Power Administration (BPA).

High seasonal river flows resulting from runoff from large snowpacks caused an overabundance of hydropower and left no room on the grid to accommodate wind power. This led the BPA to curtail wind production this spring, which angered wind developers and prompted them to file a complaint with the Federal Energy Regulatory Commission (FERC) in June.

West coast fishermen and fishing businesses today thank the Nez Perce Tribe and the State of Oregon for successfully advocating to retain court-ordered levels of water spilled over federal dams in the Columbia and Snake Rivers during the 2011 spring salmon migration. This spill has been a key reason for recent improvements in salmon returns, although numbers are still far below levels needed to sustain healthy salmon populations.

On September 22, forty-two conservation, fishing, clean energy and outdoor organizations from across the Pacific Northwest delivered letters to the members of congress in Oregon, Washington, Idaho and Montana.

The organizations express grave concerns about the potential impacts and risks to our communities, businesses, and environment if Exxon’s is successful in establishing a brand-new “high and wide” mega-industrial transportation corridor through the heart of the Pacific Northwest.

Bob Rees of the Northwest Guides and Anglers Association has an editorial in The Oregonian today on how changes to the dam system recommended by scientists and fishermen are bringing back wild salmon. But we still have farther to go.

Working Snake River for Washington, a collaboration of clean energy proponents, conservationists, salmon and orca advocates, commercial and recreational fishermen, farmers and businesses, is a response to the government’s two-decade, multi-billion-dollar failure to craft a lawful, science-based federal plan that protects the Columbia Basin’s endangered wild salmon and steelhead.

On Tuesday, 120 Western Washington business owners and community leaders wrote to U.S. Senators Patty Murray and Maria Cantwell urging their leadership in solving the Northwest salmon crisis. The open letter to the senators also appears as a full-page ad in today’s Puget Sound-based weekly, the Stranger.

These leaders want the senators to bring together all interests —farmers, fishermen, energy users, business owners and local communities — to craft a durable, science-based and economically viable salmon restoration plan. They acknowledge past tensions surrounding the salmon issue, but note the enormous economic opportunity if Washington can forge an effective long-term solution.