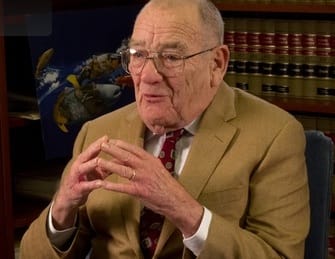 Portland, OR—Today Earthfix news released video footage of Judge James Redden endorsing increased spill for salmon as well as lower Snake River Dam removal to save wild salmon. The Judge, who resigned from the long running salmon case last November after a decade, presided over the case longer than any other federal judge and is intricately familiar with both the law and the science around Snake River salmon restoration. His remarks today are his strongest statement on NW salmon policy to date.
Said Save Our wild Salmon policy director Nicole Cordan, “Judge Redden agrees with what we have known for years: that the river needs to run more like a river if we are going to save wild salmon. His remarks highlight a need to bring stakeholders together and discuss options, including lower Snake River dam removal, in a collaborative and science-based forum.”
Said former Oregon Chief of Fisheries Doug DeHart, “Removing the lower Snake dams is the measure most likely to restore wild Snake River salmon. The Judge knows it, scientists and economists know it, conservationists know it. The only real question now is why don’t the federal agencies know it?”
The endorsement is great news for thousands of businesses in the Pacific salmon states, as salmon restoration is responsible for jobs from California to Alaska.
“The judge’s statements call into question the Federal Agencies interpretation of the ruling from last August that they’re on the ‘right track,’” said Glen Spain of Pacific Coast Federation of Fishermen’s Associations.  “Clearly the judge intended for more serious revisions to the illegal BiOp.”
The video footage is part of a documentary being produced by Aaron Kunz of Idaho Public TV to be released later this summer. In the meantime, the footage will be helpful in setting a solution’s table of the region’s stakeholders to start the work of saving endangered salmon now.