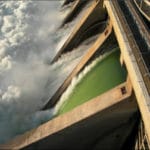 Increasing the amount of water spilled over eight Snake and Columbia river dams to keep juvenile fish away from hydroelectric turbines might be enough to recover most of Idaho’s endangered salmon populations without breaching dams, new studies suggest.

A state, tribal and federal science team that has been working since 1996 is urging federal fish and wildlife officials and dam managers to change their management to test the theory, which is based on a dramatic increase in data collected over the past decade.