The founders of the NW Energy Coalition recognized a painful truth: that the bountiful cheap electricity produced by the Northwest’s system of federally financed hydropower dams came at the cost of the incredible wild salmon runs that once defined our watershed and supported myriad cultures and communities.So they made sure the 1980 Northwest Power and Conservation Act required equitable use of Columbia Basin waters for power and fish.

Since then, this Coalition and our partners have had to fight tooth and nail to realize even minimal progress on that mandate. To this day, the federal agencies that run the dams and market their power have failed to offer any legally valid or scientifically defensible plan for recovering the iconic and economically crucial salmon stocks.

The next few months offer exciting potential to escape that quicksand. A federal judge rejected the feds’ most recent bad plan and gave them until the end of 2013 to come back with a legal one. This interim gives the region a real chance to fashion a regional solution. The best idea is a solutions table at which all the communities that depend on the river can hash out a lasting solution that works for everyone. The window for starting the process is a small one, so the time to act is now.

The NW Energy Coalition hangs its hat on bringing together diverse voices and interests to forge clean and affordable energy solutions. The Coalition works with Save Our wild Salmon, another coalition that brings together commercial fishing, sports fishing and conservation groups, for an “all-in” approach to the salmon issue.

For the last 20 years the table has been restricted to federal, state and tribal agencies. It’s time for all the stakeholders to take their places at a table so we can find real solutions that keep all the river communities whole. That means farmers, bargers, electric utilities, labor unions, commercial and sports fishers, clean energy and conservation advocates, as well as the governmental agencies.

Solutions tables work! The Northwest managed its way through the electric deregulation crisis because of the multiparty stakeholder negotiations known as the Comprehensive Review. Problems as intransigent and acrimonious as Columbia Basin salmon recovery have been solved at solutions tables for the Klamath Basin, for the Everglades, for the Elwha dams, and for the White Salmon River.

So what would it cost to follow the law and actually recover the dam-endangered salmon stocks? Perhaps surprisingly, doing a proper job would have no effect on utility customers’ pocketbooks at all!

The Coalition’s 2009 study, Bright Future, shows that the Northwest can meet its new electricity demand through 2050, replace the power from the four lower Snake River dams AND replace the coal-fired power now serving the region with clean, affordable energy efficiency and new renewable power. The Northwest Power and Conservation Council went one step better in the analysis it published for the Sixth Northwest Power and Conservation Plan.

The Sixth Plan relies on energy efficiency to meet 85% of new electricity demand through 2030. Although rates rise to cover the cost of efficiency and of the new renewables needed to meet the remainder of the demand, the wonder of energy efficiency means that families and businesses will buy far fewer kilowatt-hours. So even though the rate per kWh is higher, bills actually go down.

The Sixth Plan analysis goes beyond the basic plan to look at scenarios — including Bright Future’s — that bring back salmon and cut coal power’s greenhouse gas emissions. The Council’s scenario analysis shows that the large base of energy efficiency in the plan can absorb the costs of replacing both the coal and the salmon-killing dams, resulting in lower bills than we have right now. (See the Bright Future/Sixth Plan comparison in our 2010 Transformer: A cheaper bright future. )

The last rejected Obama administration plan mirrored its forerunners by focusing on habitat improvements and evading the real issue of the dams and their operation. U.S. District Judge James Redden told the feds to write a new one that includes contingencies in the highly likely event that habitat measures don’t achieve the legally required results.

Now is the time to bring salmon and river stakeholders – commercial and recreational fishers, irrigators, utilities, 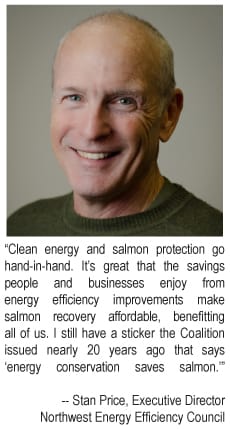 electric ratepayers, barging interests, affected unions and communities – to a solutions table to end the cycle of seemingly endless litigation.

A solutions table promises united development of a legal, scientifically valid plan addressing the needs of fish, people and power. Three years ago this month, U.S. Sen. Mike Crapo of Idaho endorsed a collaborative, all-options-open approach to salmon recovery, just like the approach the Republican senator famously used on the Owyhee Canyonlands.

Support for a collaborative, comprehensive solution is growing regionally and in Washington, D.C. Additional push is needed to set the solutions table.

Here’s what you can do:

For more information on the salmon solutions table, including a list of suggested participants, visit Save Our wild Salmon’s website.