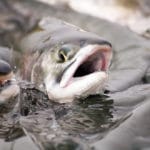 Bipartisan group of lawmakers join U.S. businesses and conservation groups in calling for a new approach to salmon restoration

WASHINGTON, DC — In a letter sent this week, 52 Members of Congress called on President Obama to convene a “solutions table” to help protect and restore endangered wild salmon and steelhead in the Columbia and Snake River basins of the Pacific Northwest.

With bipartisan support from lawmakers representing 23 states and territories, Congressmen Jim McDermott (D-WA), Tom Petri (R-WI), and Earl Blumenauer (D-OR) spearheaded the letter to bring together all parties with a stake in salmon restoration to create a broad-based, collaborative process that explores and identifies real salmon recovery solutions. The House letter follows a recent letter from nearly 1,200 American businesses calling for a new approach to salmon restoration by setting up such a collaborative process. The letter also follows a request from seven of the nation’s leading conservation groups seeking a meeting with the new Commerce Secretary, John Bryson, to discuss a similar approach.

“Discussion and open debate are critical to creating a successful salmon restoration plan,” said Congressman McDermott.  “The previous four plans did not consider all stakeholder views, and were unsurprisingly struck down in federal court.  Now is the time to act.  By convening a stakeholder’s solutions table that gives all affected parties a voice, we can ensure a thoughtful and successful salmon plan that not only saves taxpayer dollars, but can truly protect this cherished resource.”

Spanning seven western states (Washington, Oregon, Nevada, Wyoming, Idaho, Montana and Utah), the Columbia-Snake River Basin was once home to the world’s most abundant salmon runs, with as many as 30 million fish returning annually. Unfortunately, the Basin now sustains less than one percent of that historic number. Thirteen stocks of Columbia-Snake River salmon and steelhead, including all four remaining Snake River stocks, are listed under the Endangered Species Act.

In August, a U.S. District Court ruled the current Columbia Basin federal salmon plan illegal. It’s the fourth salmon plan to be invalidated by the courts over three administrations. Two decades of illegal plans have done little for salmon, and have cost U.S. taxpayers billions in failed efforts.

“For years I have strongly supported the notion that all scientifically credible options to restore historic Columbia-Snake River salmon runs should be thoroughly evaluated,” said Congressman Blumenauer. “Had we done this before, we might have avoided years of legal uncertainty and taxpayer expense. The Administration has a significant opportunity to convene the region’s sovereigns and stakeholders and begin having a comprehensive discussion. It may be the key that moves us beyond the courtroom and towards solutions that finally satisfy endangered species requirements, support sovereign treaty rights, create sustainable jobs for local economies, and restore wild fish runs in the Columbia-Snake Basin.”

“Federal agencies have an obligation to American taxpayers to craft a salmon plan that makes fiscal and scientific sense before billions more in federal dollars are spent on ineffective efforts,” Congressman Petri said.  “To date, we’ve failed the American public on that front, and have instead thrown good money after bad on practices that simply haven’t worked. But by changing course and bringing stakeholders together, we can achieve a plan that works for salmon and federal taxpayers.”

“Genuine, durable salmon recovery in the Columbia-Snake River Basin will only come from bringing all the parties together to craft a comprehensive solution that everyone can live with – including fishermen, farmers, and energy consumers,” said Zeke Grader of the Pacific Coast Federation of Fishermen’s Associations in California.  “We thank the Congressional members who have signed this letter calling on the Obama administration to convene this process.”

“We’ve spent $10 billion in taxpayer and ratepayer money, and wild salmon are still in trouble. We need a new approach, one that’s truly inclusive. Businesses like mine, along with other interests who are affected by the future of salmon in the Columbia Basin, we all deserve seats at the table,” said Paul Fish, President and CEO of Mountain Gear, based in Spokane, WA.