With so much focus on the plunging cost of solar power, wind power, and now storage as well, it’s sometimes hard to remember that energy efficiency is still our most const-effective and production alternative energy resource, accounting for nearly 40% of all the carbon emission reductions we’ve achieved in the last decade. 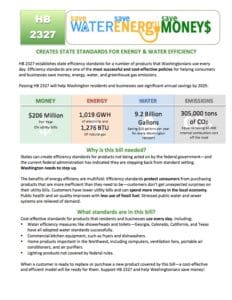 That’s why it’s a big deal that two innovative EE bills making their way through the Washington and Oregon legislatures passed important tests this week.

In Washington, HB 2327, which would establish enhanced efficiency standards for appliances ranging from portable air conditioners and compressors to faucets and toilets, passed the House of Representatives and now goes to the Senate.

If enacted, HB 2327 would reduce electricity consumption in Washington by more than 1,000 GWH, reduce water consumption by over 9 billion gallons annually — 120 gallons per Washingtonian — and would reduce carbon dioxide emissions by the same amount as taking 65,000 gas-powered cars off the road.  It will also save Washington households and businesses more than $206 million annually on their utility bills. 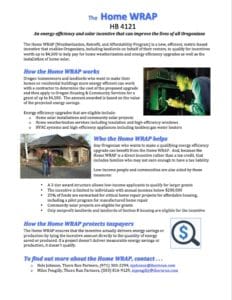 Oregon HB 4121 — the HomeWRAP bill — which creates new incentives for households to implement energy efficiency measures and to install home solar, was passed to the Ways & Means committee with a “do pass” recommendation.  HomeWRAP is particularly innovative in making the incentives available to low-income households and communities.

HB 4121 does this by offering direct payments rather than tax credits, which benefit only those with incomes high enough to incur a tax liability.  And it feature a multi-tier award structure that provides greater support to low-income applicants.

As good as news of the bills’ progress is, they’re not home yet.  So, be on the lookout for updates and requests to contact legislators as they continue on their way to becoming law.