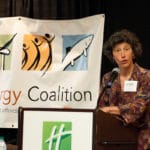 More than 120 people from around the region attended this edition of the NW Energy Coalition’s twice-yearly conference, which rotates through Oregon, Idaho, Washington and Montana. Coalition members returned the next day to elect board members, select annual award winners and strategize.

Bullock and Rowe
“Montana ranks third for wind potential,” Bullock said. “If Kansas continues with its state budget woes and Texas succeeds in seceding from the union, we’ll be No. 1.” He also noted the state’s solar resource and the job-creation possibilities in clean energy development and climate action.

Rowe said NorthWestern’s power generation base is now primarily hydropower, which best meets the utility’s load pattern and prepares the utility for future closure of the Colstrip, Mont., coal units. He saw virtue in diversifying NWE’s renewables holdings beyond hydro and wind, but said additional resources need to meet customer demand. Rowe also called energy efficiency “our No. 1 resource,” but said it poses risks for the corporation.

Thanks also to Coalition members and allies who turned out, participated in and provided energy to discussions, and made the conference and membership meetings so successful.

Members re-elected board chair Megan Decker, board treasurer George Pohndorf and board member Jeff Bissonette to the Coalition board of directors. Bissonnette recently became executive director of the Oregon Solar Industries Asso., whose application for Coalition membership was approved.

Members also voted to commend the organizations that collaborated to pass Oregon’s Clean Electricity and Coal Transition Act this past legislative session, and the victorious plaintiffs in the suit against federal agencies’ recovery plan (Biological Opinion) for wild salmon in the Columbia-Snake basin. Both commendation groups include several Coalition members and the Coalition itself.

All will receive their awards during the Coalition’s Fall 2016 NW Clean & Affordable Energy Conference and Awards Gala Nov. 17-18 in Portland, Ore. Save the dates and stay tuned for agenda announcements.