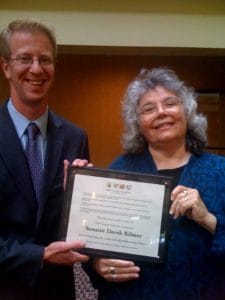 Washington State Senator Derek Kilmer (D-Gig Harbor) has been honored by the NW Energy Coalition for his legislative advocacy of energy efficiency.

Kilmer received his award from Coalition executive director Sara Patton during a brief ceremony July 20. The resolution of commendation conferred by the Coalition Board of Directors notes Kilmer’s “leadership and advocacy for super efficient energy codes, innovative energy performance standards and efficiency standards for public buildings.”

The Coalition resolution states that Kilmer’s efforts have helped positioned Washington state to be a leader in energy efficiency. In fact, passage of Efficiency First made Washington the first state to legislatively adopt the Architecture 2030 Challenge for making private and public buildings as energy efficient as possible.

Here’s the full text of the resolution:

WHEREAS the Northwest Power and Conservation Council’s Sixth Plan calls for meeting most new electricity needs over the next 20 years with cost-cutting energy efficiency; and

WHEREAS development of energy efficiency reduces future climate-changing carbon emissions and other pollution; and

WHEREAS energy efficiency creates new jobs and will help transition Washington to a more clean and prosperous economy; and

WHEREAS Senator Derek Kilmer positioned Washington state to be a leader in energy efficiency with his leadership and advocacy for super efficient energy codes, innovative energy performance standards and efficiency standards for public buildings;

Therefore be it resolved that the NW Energy Coalition commends Senator Derek Kilmer for his leadership for a clean and affordable energy future.