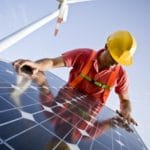 Solar power is a real deal right now and Idaho Power got state approval for two sales contracts with developers.

The Idaho Public Utilities Commission approved the two contracts Friday for the two projects – one in Kuna and a second in Grand View – that would produce 120 megawatts, enough power to serve 83,000 average-sized homes. The projects are scheduled to be completed in 2016.

The approval comes as Idaho Power has asked the PUC to vote on another 11 solar projects with the potential to produce 281 megawatts at a 20-year cost of nearly $1 billion. This expansion of solar power comes from Idaho Power’s requirement under the Public Utility Regulatory Policies Act to provide an open market for power developers who can sell them power at the same cost they would pay to build their own natural gas plant.