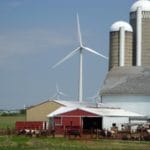 Wind energy contributed significantly more new electricity to power the nation than any other resource last year, according to recently released data from the U.S. Energy Information Administration. The EIA predicts the trend will continue in 2015, expecting 9.8 gigawatts of wind energy to be developed nationwide or about half of the generating capacity to come online this year.

The data and projections confirm what’s happening in Montana, where wind has been leading new electric energy development for the previous 10 years.

In 2005 Montana passed a Renewable Portfolio Standard requiring large investor owned utilities to acquire 15 percent of their energy from new renewable resources. In the 10 years since the passage of the RPS, 60 percent of the new energy capacity constructed in Montana for in-state use and for export has been wind energy. The 665 megawatts of wind energy development has meant $1.4 billion in economic investment, more than $2 million in annual lease payments to landowners, hundreds of construction and permanent jobs, and tens of millions in property taxes to state and local governments. It has also done so without negatively impacting in-state consumer electric rates, as a 2014 bipartisan interim legislative committee found in an exhaustive study of the state’s portfolio standard.