Nationally, the leading energy story for much of the past few years has been the decline of coal-fired electricity in the face of low-priced natural gas. But, once the predator, natural gas is increasingly becoming the prey. The new predator? Renewable energy.

The latest example of renewables elbowing out natural gas is found in the most recent Integrated Resource Plan (IRP) update from PacifiCorp. The new plan includes no natural gas resources in the 20-year planning period. Instead, PacifiCorp proposes building enough new wind capacity to power 400,000 homes. 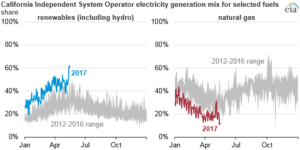 t, “This is the first time an IRP has not included new fossil-fueled generation as a least-cost, least-risk resource for PacifiCorp.”

At the same time, energy efficiency and clean renewables have begun driving natural gas-fired power out of California. Recently, NRG Energy announced the retirements of three natural gas power plants and Energy Information Administration data clearly show a large-scale displacement of natural gas generation by renewables in the first half of 2017. 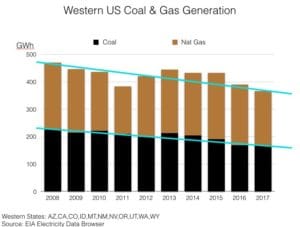 At a regional level industry observer Joe Deely recently pointed out that, while the amount of electricity generated from coal in an area that includes AZ, CA, CO, ID, MT,NM, NV, OR, UT, WA, and WY, has declined by more than 25% since 2008, the amount generated from natural gas has also declined almost 17%. Most of the reduction in natural gas generation has taken place since 2015.

While these reductions are partly the product of state-level government policies, they are also a product of market forces that are increasingly turning in favor of renewable energy and energy efficiency. That means the west’s clean energy trend could soon spread.