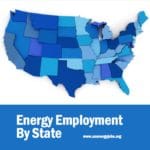 Clean and advanced energy jobs are huge in the NW

States are often identified with particular industries that have big economic footprints — Washington with the aerospace industry; Oregon with the logging and wood products industries; and Idaho with the forestry, farming, and fishing industries.  But, as big as those footprints are, those industries in Washington, Oregon, and Idaho don’t provide as many jobs as new and emerging clean energy industries.

Wind energy, solar energy, hydropower, and, above all, energy efficiency now provide almost 167,000 jobs in Washington, Oregon, Idaho, and Montana.  And, despite the fact that the growth of wind and solar power gets lots of press coverage, almost three-quarters of those jobs are supported by energy efficiency activities, which include high efficiency lighting, appliances, and HVAC as well as advanced materials and insulation.  Additional jobs are being driven by emerging electricity storage, smart grid, and micro grid technologies.

These facts and others can be found in the recently released 2018 U.S. Energy and Employment Report and its USEER 2018 State Facts supplement by the Energy Futures Initiative (EFI) in partnership with the National Association of State Energy Officials.

The picture the report paints is one in which the expansion of clean energy is becoming as important for economic growth and prosperity as it is for protection from environmental degradation and climate change.  That’s reflected by the fact that, while the clean energy boom provides lots of jobs for white collar professionals, a majority of the jobs being created are found in construction and manufacturing, which means that opportunity is happening across the skills spectrum.

Another point of reference by which the economic value of the clean energy economy can be measured is the number of jobs supported by fossil fuel resources that clean technologies are gradually replacing.  In the 4-state Northwest region, electricity generation from natural gas, coal, and oil account for fewer than 2,000 jobs. Meanwhile nuclear generation provides fewer than 600 jobs.

For these reasons, it’s important that, as policymakers consider proposals to help the region transition to a clean energy system, they fully appreciate the economic benefits of doing so as well as the environmental and health benefits.