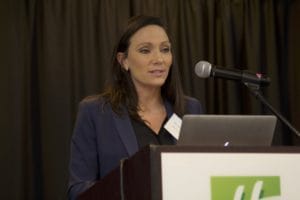 Blessed with best-in-the-nation wind power potential, Montana was a focal point for discussion by industry experts, policymakers, and clean energy advocates who explored strategies for tapping that potential.

In her introductory remarks, Mariah Kennedy, of Puget Sound Energy, described how growing demand for clean energy from both commercial and residential customers is shaping utility business strategies.  On the product side, she pointed to renewable energy options that her company and others now offer all customer classes.  And, on the operations side, she discussed the decision by her company and other utilities to join the Western Energy Imbalance Market, which she said can be a powerful tool for more efficiently using the renewable resources in the west to meet utility loads.

Keynote speaker John Prescott, a member of the western Energy Imbalance Market governing board, detailed the benefits to which Mariah Kennedy referred.

The western EIM is a real-tim 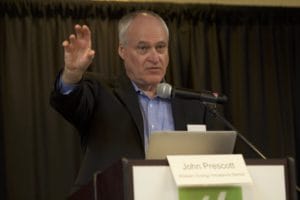 e bulk energy trading market that runs every five minutes to automatically dispatch the lowest-cost energy resource required to balance customer demand across its trading area.  In addition to helping reduce energy costs, the imbalance market also helps integrate renewable resources into the electric system by reducing the need for curtailments of power from renewable resources.  That in turn translates into fewer greenhouse gas emissions and improved system reliability. 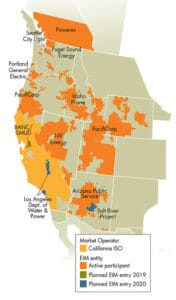 As valuable as those benefits are, to be realized on a broad scale, the western EIM will need to attract members beyond its current roster of eight participants with four more participants scheduled to join in the next couple of years. Participating Northwest utilities include Idaho Power, PacifiCorp, Portland General Electric, and Puget Sound Energy.  Seattle City Light will join in 2019.

Which, if any, of those forms the western EIM takes will be a function of market demand and policy choices by state governments and utilities. 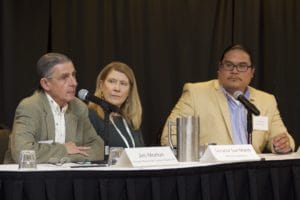 Discussions and processes concerning imbalance markets, transmission planning, resource planning, and other arcane aspects of the energy system are often the province of experts.  Meanwhile, those whose lives are most affected by the choices that emerge often have little say.

That’s partly due to the specialized nature of the subject matter, but also to cultural and procedural barriers to participation.  Those barriers are particularly high for communities that often aren’t represented on governing bodies and who lack knowledge or the resources necessary to engage experts to advocate on their behalf.

L. Jace Killsback, President of the Northern Cheyenne tribe, cited utility service disconnection and prepayment requirements as examples of harmful and sometimes discriminatory policy choices made by bodies in which communities have little or no input.

Panel moderator, Oriana Magnera, asked the panel how, in the face of these barriers, equity in participation and outcomes can be achieved.

Jim Morton of the Human Resource Council said that policymaking and regulatory bodies have to make themselves more accessible to all constituencies.  Montana Senator Sue Malek pointed out that the issue of access is multi-dimensional.   Meetings and proceedings need to be scheduled with sufficient notice and at times and in locations that are convenient for people whose interests will be affected.  But, the panelists agreed, it’s also important that communities have access to the expertise required to effectively interpret and advocate on the issues being considered.

The panelists also agreed that citizens have to be more assertive at the ballot box and in public forums.  Killsback said that education about energy issues is an important part of stimulating that kind of public engagement.  But, the speakers recognized that, the bigger challenge may be that people who are beset by family, health, and financial crises simply can’t afford to devote much time or attention to energy issues.

Even collective action, such as when tribes and utility co-ops try to pursue innovative energy solutions, often fails due to insufficient resources.  And the lessons learned from successful programs often don’t percolate up to the state policy level.

The issues of insufficient community participation, bureaucratic detachment, and the arcane nature of energy policy discussions came together in a discussion about the Montana Public Service Commission’s recent decisions concerning how energy resources should be valued and the length of renewable energy contracts under the Public Utility Regulatory Policies Act (PURPA). The decision to shorten contracts and use a pricing structure that does not reflect the full value of the resources is especially harmful for regions such as eastern Montana that have immense wind power potential and tribes and communities that would benefit from community solar. 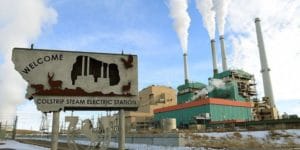 To Senator Malek, this decision and others are evidence of the need for changing from an elected Public Utility Commission to an appointed one so that the commissioners have deeper expertise.

Meanwhile, Killsback and Morton pointed out, communities and tribes in Montana are grappling with challenges posed by the region’s overall transition away from coal-generated power to other resources.  Describing Colstrip, Montana, a community in which Killsback went to school and which will soon see its coal-fired power plant and coal mine winding down, Killsback said “renewable energy” remains a four-letter word.The panelists agreed that consumers and communities are focused on factors unrelated to energy, including healthcare and other quality of life issues, yet there is always hope that community members and policymakers will recognize the economic benefits that the development of Montana’s renewable resources has to offer.

Moderator Brian Fadie of the Montana Environmental Information Center began the panel by citing a statistic – Montana has the greatest potential for wind power in the nation, enough to power the entire Northwest region many times over.  But to date less than one-tenth of one percent of that potential has been developed.

Whether more Montana wind gets developed depends greatly on the availability of transmission channels to carry the resulting energy to out of state markets – an issue panelists addressed head-on.

This Action Plan collaboration will have its final report out to the public at the end of June.

Jeff Fox of Renewable Northwest described how demand for renewable energy is coming together in the region.  Noting that the Northwest Power & Conservation Council’s integrated resource plan forecast for 2036 calls for four gigawatts of renewable energy, Fox cited as reasons for growing customer demand, the ongoing fall in prices for renewables, renewable portfolio standards in Oregon and Washington, and the possibility that those state will enact carbon pricing policies. Fox also noted the emergence of the western Energy Imbalance Market as an important enabling factor.

But, asked Fadie, what are the barriers to Montana renewable resources meeting those needs?

Michael Cressner of the Orion Renewable Energy Group, a resource developer, quickly answered, “Transmission”.  Explaining that at present there is only one power line connecting eastern Montana to west coast markets and its availability due to costs is in question, Cressner said there is at present too much risk for prospective customers to sign con 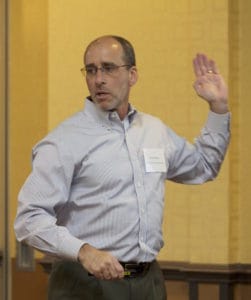 tracts with renewable energy producers and, therefore, too much risk for investors as well.

Brian Lipscomb of Energy Keepers, a hydroelectricity generating corporation owned by the Confederated Salish and Kootenai tribes, raised another concern – low market prices are making it hard for renewable energy to be competitive.  Lipscomb also observed that low commodity prices make it hard to attract investment capital regardless of the availability of transmission.

Panelists debated the magnitude of the impact of market prices, federal tax incentives, and availability of transmission on the pace of new renewables development.

Asked whether the emergence of more organized energy markets, such as the Western EIM, would help address these issues as well as the need for “firming agents” to balance a wave of renewable energy, the panel agreed they would do so only partly.  Cressner explained that organized markets add stability by sharing cost risk, which would otherwise fall entirely on the developer.

However, Lipscomb pointed out, organized markets don’t alter demand and, therefore, can have only a limited effect on prices regardless of how much they improve efficiency and reduce risk.

Panelists also noted that there are factors that may over time “rationalize” energy market prices, including potential regulation of fracked natural gas, carbon pricing and electrification of transportation and rising renewable portfolio standards in the west. The panelists made it clear that the opportunities for new wind and solar development abounds in Montana and the barriers to that development are more actively being addressed than in years past. All expect that the Montana Renewable Resource Development Action Plan will help advance possible solutions to better link the Montana resources with key markets.