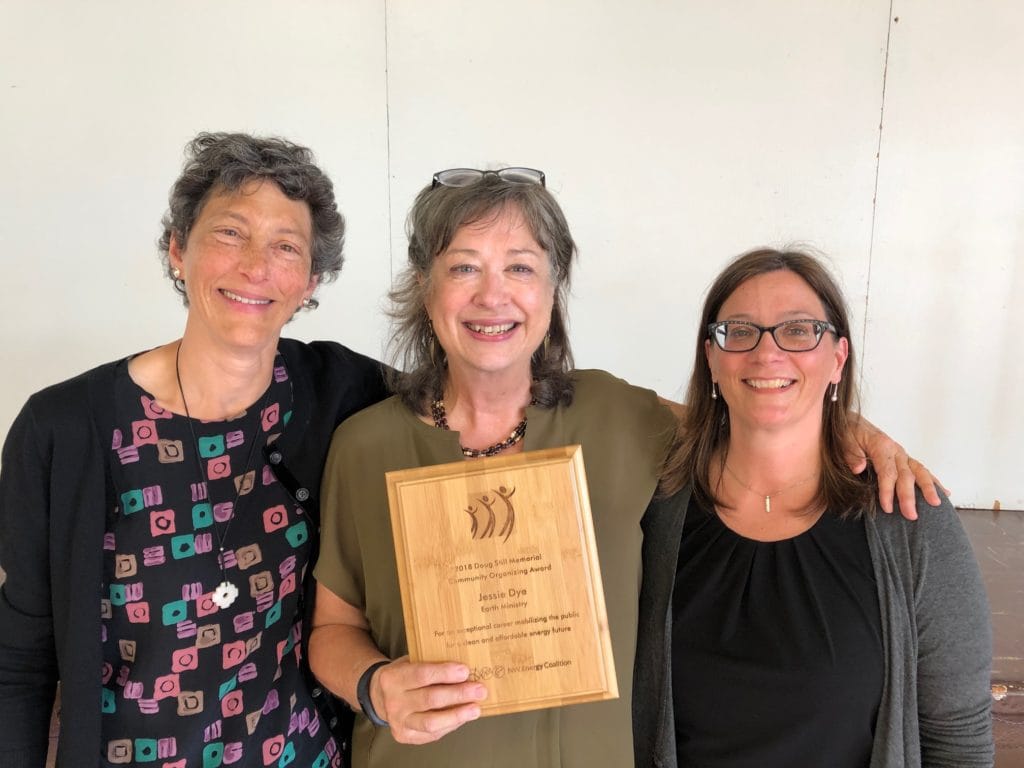 The Doug Still Memorial Community Organizing Award honors individuals and organizations for engaging citizens in action for a clean and affordable energy future. It is named for Doug Still, a founding member of the NW Energy Coalition and a lifelong organizer who fought to make our energy system cleaner, more accountable and more affordable. As a Presbyterian minister, Doug was a civil rights leader who organized and served the needs of migrant farm workers in the 1950s, marched for civil rights in Chicago and Selma in the ’60s, and fought for equal opportunity in education as head of United Ministries in Public Education, which he helped found in 1967. He moved to the Northwest in the early 70’s and quickly became a leader in the anti-nuclear and clean energy movement.

Jessie Dye of Earth Ministry embodies the passion and spirit that Doug Still brought to his organizing. She knows that the voices of faith leaders and those within their congregations are what make the difference, so she works passionately to bring those voices forward. She understands that organizing is about building relationships and engaging to find out what people care about and what they value. Jessie is all about empowering people and fueling optimism that their commitment to advocacy will make a difference.

And make a difference she has. Earth Ministry has brought the voices of the faith community to so many public hearings on climate and environmental justice that we forget that it has not always been the case in Washington.

The closure plan for the coal-fired power plant in Centralia WA was hard-fought and controversial. Yet Earth Ministry knew that the campaign needed the faith community to voice support for worker and community transition. And Jessie was a leading organizer in making sure policy-makers and the plant owner stuck with the commitment to fund community transition as the plant closes.

Then Jessie brought her considerable talents to the coal export fight. Earth Ministry and the whole campaign knocked that one out of the park!

And the final campaign I will highlight is the work with the Alliance for Jobs and Clean Energy and Washington Initiative 1631. First, Earth Ministry was a founding member of the Alliance and has always recognized that in order to save the planet from environmental destruction, we need a bigger community effort that focuses on justice. Jessie organized faith communities and churches to gather signatures, endorse the campaign, and talk to their congregations about the Initiative. That’s the kind of strong organizing that builds movements and that Earth Ministry is known for.

Jessie and Earth Ministry are leaders in the community and critical Coalition partners in the fight against climate pollution and for environmental justice. The NW Energy Coalition is honored to give this award to Jessie for her dedication and tireless activism.