If you care about creating jobs – as virtually all political and opinion leaders say they do – then you enthusiastically endorse full development of our energy efficiency and renewable energy potential.

“The notion that we must choose between clean energy and economic progress is utter nonsense,” said NW Energy Coalition executive director Sara Patton. “Building the domestic clean energy economy is our first and best choice for getting the Northwest back to work.”

A recent Pew Center for the States report confirms what folks on the ground have known for some time, that energy-saving and renewable energy-generating measures are powerful job engines.

In 2009 more than 42,000 Washingtonians earned their livings in jobs directly tied to energy efficiency or renewable energy production, according to the state Department of Commerce’s most recent green economy report.

A 2009 University of Massachusetts study on the impact of stimulus funding and investment from the American Clean Energy and Security Act predicts another 33,000 jobs in Washington’s clean energy sector.

Oregon clean energy jobs grew much faster – 51% growth — than jobs in the economy as a whole – just 8% — from 1998 to 2007, according to Pew. Since 2007, the solar manufacturing industry alone has added some 2,100 jobs, according to Oregon officials and the Renewable Northwest Project (RNP).

Venture capital focused on clean energy totaled more than $70 million between 2006 and 2008, Pew reports. This year, according to RNP, capital investment in Oregon wind, solar and geothermal energy will top $5.4 billion. Iberdrola Renewables employs 350 high-tech and high-wage workers at its Northwest American headquarters there.

Oregon State Building and Construction Trades Council executive secretary John Mohlis, in an RNP press release, said “renewable energy projects provided jobs in the construction trades even at the height of the recession, when our sector was hit hardest. They offer a key economic recovery path, not just for energy companies, but for dozens of industries and many workers across the state.”

Clean energy jobs’ share of overall employment is greater in Oregon than in any other state in the nation. With Oregon’s unemployment rate still hovering around 10%, the importance of clean energy development to economic revival cannot be overemphasized.

A University of Massachusetts study, “The Benefits of Investing in Clean Energy,” predicts that federal investments in energy efficiency and renewables will create some 6,000 jobs in Montana.

Idaho is another shining example of a state where clean energy investment is propelling job creation beyond that of the general economy. According to the Pew report, 428 new firms generated more than 4,500 new clean energy jobs – renewables and efficiency — between 1998 and 2007. Clean energy jobs far more than doubled, growing by 126%, whereas job growth in the entire state came to less than 14% for the period.

According to the Renewable Northwest Project website, at least six new wind farms and five new solar projects have begun producing power in Idaho since 2009.  Ten more wind farms with a total capacity of nearly 1,000 megawatts have been approved. That’s a lot of new and pending jobs. 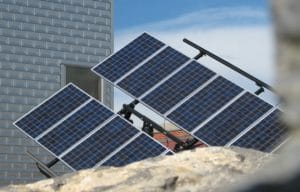 A study by the region’s official power planning agency, the Northwest Power and Conservation Council, finds that:

Efficiency, of course, is the mother lode. In addition to direct jobs such as those in manufacturing and installing insulation, lower bills from efficiency lead to consumer spending that creates jobs throughout the economy. According to the Council, saving 1 aMW of energy use creates seven jobs. That’s a 7:1 ratio over fossil-fueled power.

Plus, energy efficiency equipment and systems are installed and operated on-site, using local workers whose jobs cannot be outsourced to faraway countries.

The Power and Conservation Council’s sixth regional plan, approved last year, leans heavily on energy efficiency to meet the next 20 years of growing energy needs in the Northwest. The job implications are significant.

Council staff calculated that acquiring the nearly 6,000 aMW of energy efficiency in the plan (85% of projected new demand) “will create about 3,500 new jobs per year in the energy and energy-services industries. With sustained investment in conservation over the next 20 years, the region can expect an additional net increase of 43,500 jobs throughout the economy due to the ongoing increased savings in energy bills.” That’s a total of 47,000 new jobs from energy efficiency.

The key to the above-quoted Council statement is “with sustained investment.” Getting those new efficiency-related jobs, as well as those associated with the new renewable resources recommended for meeting most if not all remaining new demand, depends on committed pursuit of the Sixth Plan targets.

Those who think creating good, local jobs is the most important thing will share that commitment.