Digital video recorders (DVRs), cable and other pay-TV boxes cost American consumers $3 billion a year — $1 billion to operate when in active use and an additional $2 billion while inactive but still running at near full power, according to a new study by the Natural Resources Defense Council.  Also known as set-top boxes, these devices squander the equivalent annual energy output of six coal burning power plants (500 MW) because they are not equipped to power down when not being used.

“Set-top boxes are the ultimate home energy vampires, silently sucking significant amounts of energy and money when nobody’s using them,” said Noah Horowitz, senior scientist at the NRDC.  “The consumer, who pays the electric bill, deserves technologies without hidden costs.  At a time when everyone is trying to cut waste from our budgets and electric grid, service providers shouldn’t saddle their subscribers with boxes that unnecessarily squeeze their wallets.”

The NRDC study, Reducing the National Energy Consumption of Set-Top Boxes, also found that today’s average new cable high-definition digital video recorder (HD-DVR) consumes more electricity annually than the new flat panel TV to which it’s typically connected and about 40% more than its basic set-top box counterpart.  In contrast, cell phones, which also work on a subscriber basis with a need for secure connections, are able to use extremely low levels of power when not in use – primarily to preserve battery life.

There are approximately 160 million set-top boxes installed in US homes, or the equivalent of one box for every two Americans. These boxes consume as much electricity each year as that consumed by the entire state of Maryland and are responsible for 16 million metric tons of carbon dioxide emissions per year. 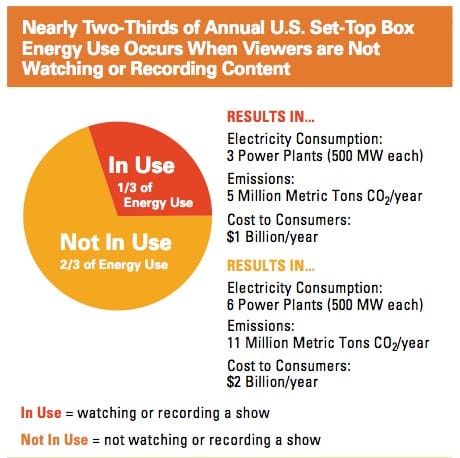 National set-top box electricity use is growing as more consumers shift from basic boxes to DVRs, which provide consumers with a convenient way to record and playback shows. A typical household with one DVR and one basic set-top box uses approximately the same annual electricity use of one new refrigerator.  These devices still run at near full power when the consumer is neither watching nor recording a show.  Hitting the on/off button merely dims the clock or display and does not significantly reduce the amount of power used.

Dramatic energy savings can be readily achieved by having set-top boxes automatically go into a low power mode when people are neither watching nor recording a show.  This functionality is beginning to appear in boxes used in Europe. To achieve this in the United States, pay-TV service providers such as Comcast, Time Warner, Direct TV, Dish and the phone companies – who control set-top box installation, configuration, software updates, repair, refurbishment, retirement and resale service – could work with manufacturers to develop and deploy more energy efficient devices.

Likewise, to make sure their interests are being met, consumers can request their pay-TV service provider (e.g. their cable or satellite company) supply them with set-top boxes that meet ENERGY STAR Version 4.0.

“We’ve improved the efficiency of all sorts of electronics – from TVs to video game consoles,” said Horowitz.  “It’s just as possible to improve the efficiency of our DVRs and other pay TV boxes.  But they’re not going to build a better mousetrap unless we, the consumers, demand it.”

The Natural Resources Defense Council (NRDC) is an international nonprofit environmental organization with more than 1.3 million members and online activists. Since 1970, our lawyers, scientists, and other environmental specialists have worked to protect the world’s natural resources, public health, and the environment. NRDC has offices in New York City, Washington, D.C., Los Angeles, San Francisco, Chicago, Livingston, Montana, and Beijing. Visit them at www.nrdc.org
Posted in Energy Activist Online, Energy Efficiency
← Gone but not forgotten dept. – Efficiency Works! rides off into the sunsetFrom the Executive Director: Coalition and labor unions have long history →