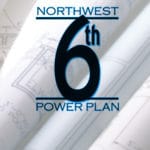 An assessment by the Northwest Power and Conservation Council shows that the efficiency of electricity use continues to improve and that the region is on track to meet the Council’s goal to improve efficiency by 1,200 average megawatts in the five years between 2010 and 2014.  Expressed as power generation, that is enough for a city the size of Seattle.

Meanwhile, development of renewable resources, mainly wind power, has continued but the pace may slow in the future because of changes in renewable energy policies in California, where much of the wind power generated in the Northwest is consumed.

The Council’s assessment is in the form of a mid-term report on implementation of its 2010 Northwest Power Plan. The power plan includes a forecast of electricity demand 20 years into the future and also an action plan for acquiring generating and energy efficiency resources to meet the anticipated demand.

“This assessment, which was developed with extensive public outreach and consultation, will help the Council frame the issues and policies that will form the foundation of our next regional power plan,” Council Chair Bill Bradbury said.

The Council revises the plan every five years; it provides overall guidance for implementation activities by the Bonneville Power Administration, the region’s predominant electricity supplier. The Council will begin work on the next plan later this year.

Other key conclusions of the mid-term assessment, which is posted on the Council’s website,www.nwcouncil.org, will help define the direction of the next Northwest Power Plan. They include: