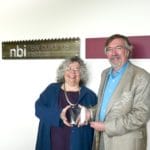 VANCOUVER, Wash. — The NW Energy Coalition, a 30-year-old regional alliance of more than 110 organizations committed to clean and affordable energy, has given its highest honor to the New Buildings Institute.

The Coalition’s Bob Olsen Memorial Conservation Eagle award is presented annually to individuals and organizations that demonstrate leadership for a clean and affordable energy future. The Coalition board unanimously selected NBI as its 2010 Eagle winner.

“New Buildings Institute was chosen to receive the award this year for its long-term commitment to energy efficiency and sustainability and for the pivotal role it played in crafting the new national energy code,” said Coalition executive director Sara Patton.

NBI worked for nearly two years on development of the 2012 International Energy Conservation Code (IECC), a model national energy code. Along with the American Institute of Architects and the U.S. Department of Energy, NBI offered comprehensive proposals to update the 2012 IECC that resulted in efficiency improvements of 25-30% –the largest single-step increase in IECC history. The changes are largely based on NBI’s Core Performance Guide, a direct path to high performance in commercial buildings.

“The NBI team led a large collaborative effort that ended up with a very successful outcome,” said NBI executive director Dave Hewitt. “Being recognized for that inspires us to keep working for a sustainable energy future.”

Patton presented the Eagle to Hewitt in an awards ceremony in Vancouver last week.

The NW Energy Coalition, formed in 1981, is an alliance of environmental, labor, civic and human service organizations, progressive utilities and businesses in Oregon, Washington, Idaho, Montana and British Columbia.

The Conservation Eagle award is named for former Coalition chair Bob Olsen, a longtime public utility district commissioner in Washington state who dedicated more than 20 years of his life to securing regional investments in cost-effective energy efficiency and to protecting energy consumers. Olsen died in 1994.