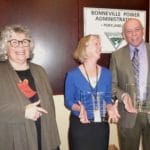 Under Weedall’s leadership, BPA helped Northwest public utilities greatly increase their conservation achievements, from 29 average megawatts in 2001 to a record 117 aMW in 2011. BPA met or exceeded its conservation targets every year during Weedall’s tenure.

Patton noted that BPA’s support for energy efficiency — “our cheapest, cleanest power source” — had been flagging prior to Weedall’s 2002 arrival. Now, she said, “Bonneville is weathering the storm and coming back better than ever.” Efficiency achievements have risen to record levels and the cost of those achievements has fallen dramatically.

Weedall built a strong planning and evaluation department for energy efficiency and significantly increased the program’s marketing efforts. He regularly discussed BPA’s efficiency work at national conferences and encouraged his staff to do the same – all of which contributed to the program’s unmatched success.

“I am truly honored to receive this prestigious award,” Weedall said. “It is especially meaningful because it is from the Coalition and represents all the incredible work and value they deliver every day in the Northwest.”

“We’re proud of the amount of savings BPA in partnership with our public utilities have helped the region achieve,” Meadows said. “And we’re motivated by, and committed to the challenge of finding the next technology or strategy that will allow us to go deeper and broader into new markets and to consumers that we have not reached in the past.”

The 30-year-old NW Energy Coalition is the region’s premier clean energy policy alliance, a growing association of more than 115 organizations, businesses and utilities committed to a clean and affordable energy future. Visit www.nwenergy.org or call (206) 621-0094 for more information.

Its Eagle award is named for former NW Energy Coalition chair Bob Olsen, a longtime public utility district commissioner in Washington state who dedicated more than 20 years of his life to securing regional investments in cost-effective energy efficiency and to protecting energy consumers. Olsen died in 1994.

BPA is a non-profit federal agency that markets renewable hydropower from federal Columbia River dams, operates three-quarters of high-voltage transmission lines in the Northwest and funds one of the largest wildlife protection and restoration programs in the world. BPA and its partners also have saved enough electricity through energy efficiency projects to power four large American cities. For more information, contact BPA at (503) 230-5131 or visit www.bpa.gov.