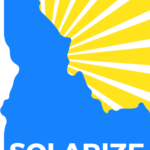 The Snake River Alliance has released the following informaton:

The Snake River Alliance and its many clean energy partners are excited to roll out Southwest Idaho’s first campaign to dramatically increase the amount of solar energy installed atop our residential and commercial buildings. Months in the making, our “Solarize the Valley” campaign will make clean energy on your rooftops easier and more affordable than ever, and you’ll soon hear a lot about the Alliance’s full-court press to boost rooftop solar in Idaho. Idaho Power’s ongoing dependence on coal to produce much of our electricity has earned it some grim publicity– this time from Norway, where one of the world’s largest sovereign investment funds has given Idaho’s largest power company a lump of Norwegian coal. The Northwest’s premier power planning body brings its moveable feast to Boise this week with a series of meetings on everything from Idaho’s solar future to how we in the Gem State are dealing with fish in our energy mix. And as always we highlight some coming events and meetings in the weeks ahead.

I: “Solarize the Valley” Off & Running & Aims to Boost Rooftop Solar in SW Idaho

A first-of- its-kind partnership between Idaho’s first clean energy advocacy organization and two popular solar power installers is making it easier and more affordable than ever for residential and commercial customers of Idaho Power to install solar panels on their rooftops and slash their The Snake River Alliance has spent the past several months working with many solar installers and technical experts to prepare our new “Solarize the Valley” campaign to take a lot of the hassle and some of the costs out of going solar. Here are some of the highlights from the news

BOISE – (May 9, 2016) – A new program called “Solarize the Valley,” sponsored by the Snake River Alliance, is going to make rooftop solar energy more affordable and popular than ever before in the Treasure Valley, starting today. Out of the 1 million solar installations in America, less than .01% of them are in Idaho. But that’s about to change.

Rooftop solar will bloom in the Treasure Valley thanks to a groundbreaking partnership between the Alliance — Idaho’s statewide voice for clean energy — and two private solar installers, AltEnergy Inc. and Site Based Energy. These solar partners will install at least 250kW of power on rooftops and businesses in Ada and Canyon Counties in the coming year.

Solarize the Valley does much of the consumer’s homework for them – such as negotiating competitive prices for high quality, American-made solar panels. “We had a transparent process of selecting these trusted installers so our participants know they are getting a great deal,” said Wendy Wilson, interim executive director with the Snake River Alliance.

Site Based Energy, a Hailey-based firm, will work with commercial participants that sign up for Solarize the Valley. “Site Based Energy is excited to be part of this team and helping businesses and organizations reduce their energy costs” said Project Engineer Beau Husfloen.

Residential participants will work directly with AltEnergy, a company that works in a number of states. Idaho Branch Manager Jesse Simpson said, “We have been part of similar programs in other regions that were very successful. And with over 320 days a year of sunny weather, we know the Treasure Valley Idaho is a perfect place to go solar.”

All interested homeowners and business owners in Ada and Canyon should sign up now by going to the web site www.solarizethevalley.org and get a free on-site assessment from a professional installer. The sign-up phase of the campaign runs until July 31, 2016.

The public is encouraged to learn more by attending one of four informational workshops coming up in the next 60 days.

Solarize the Valley is modeled after similar successful programs across the country, starting in Portland, Oregon. Over the past several years, many Solarize programs have operated in the Northwest, California and several eastern states. Idaho participants in the program will use Idaho Power Company’s net metering program, allowing their electric meters to run backward when generating more power than needed from solar energy.

“Idahoans now have an affordable alternative to buying their power from coal-fired plants and hydropower dams,” Wilson said. “We are building the world we want to see.”

The Snake River Alliance is a nonprofit, charitable organization that has worked for 37 years for responsible handling of nuclear waste and a future for Idaho powered by clean energy. The group has offices in Boise and Pocatello. Volunteers and new community supporters can help by contacting solarize@snakeriveralliance.org.

This is an exciting campaign not only for the Snake River Alliance and our clean energy program, but also for our for-profit solar partners and for the solar power movement across Idaho. Based on the level of interest pouring in, we’re confident that utility customers across Ada and Canyon Counties, and also to the east in the Wood River Valley where Solarize Blaine is taking off, will “vote with their rooftops” as we all continue Idaho’s amazing trek toward clean energy.

We welcome anyone interested in adding solar power to their rooftops or just interested in solar power in general to join us at the coming workshops described above. And if you really want to get your hands sunny, the Alliance is always looking for volunteers to make Solarize the Valley a reality. Contact Leigh at lford@snakeriveralliance.org or 208-344- 9161.

Meanwhile, take a listen to the Northern Rockies News Service story on Solarize the Valley that’s showing up in print and broadcast media outlets around the state!

Just as clean energy advocates roll out our campaign to make it easier to install solar panels on Idaho rooftops, Idaho Power has advised state regulators it plans to hold some “stakeholder workshops” to try to find out if enough solar is enough.

Idaho Power submitted a “compliance filing” in its notable 2012 solar power “net metering” case in which the Public Utilities Commission directed Idaho Power to provide annual reports on how things are going with the level of customer interest in hooking up solar installations to the company’s grid. The last filing, on April 29, included the advisory that, “Idaho Power plans to hold customer and stakeholder workshop(s) during 2016 to share the results of this report and solicit feedback on a potential rate design proposal for future net metering customers that the Company may consider filing with the Commission…”

Context: The infamous multi-utility “solar net metering” case of 2012, spearheaded by Idaho Power and soon joined by the other two big electric companies, saw a huge divide between the state’s electric utilities and those customers wanting to save money and clean up their energy footprints by installing solar panels on their roofs. In the end, the PUC sided mostly with utility customers and re-set electricity rates that would have penalized electricity customers from going solar. But the issue remains far from settled. Utilities still have legitimate concerns about how they and their customers will continue to pay “fixed costs” for things like electricity grid infrastructure if more customers defect and go on their own. So with its filing, which comes with a wealth of information about how many customers are lining up to plug their rooftops into Idaho Power’s grid, the company makes its case for a more detailed review by the PUC and all customers of how the solar net metering program is working.

Given the new realities of solar power’s rise as a dominant electricity resource in Idaho, it’s probably a discussion worth having. Expect the PUC to schedule some workshops or other meetings sometime later this summer or fall to see how we’re doing with rooftop solar in Idaho.

The Northwest Power and Conservation Council (“Power Council”) holds its monthly meeting and a few other meetings in Boise this week, beginning tomorrow, Tuesday, May 10, with a regular Power Council meeting as well as meetings of the Council’s Fish and Power committees. The meetings begin at 8:30 a.m. Tuesday at the Hampton Inn at 495 South Capitol Blvd. in Boise.

Congress created the Power Council in 1980 as part of the Pacific Northwest Electric Power Planning and Conservation Act. Each of the 4 Northwest states is represented by 2 Council members. Idaho’s Council members are Jim Yost and Bill Booth, both appointed by Gov. Butch Otter. The Power Council rotates its monthly meetings around the Pacific Northwest, and Boise usually pops up twice a year or so, including this week. Besides the regular Council meeting on May 10-11, the Council has scheduled a Technical Work Session on May 11 and its Regional Coordination Forum on May 12. Check the Council’s website for more specifics on each meeting.

Of general interest, however, the Council’s Power Committee is scheduled to convene at 8:30 a.m. Tuesday, May 10, beginning with a presentation on “Solar Development in Idaho” by Idaho Power solar power expert Scott Gates and then a presentation by Idaho Office of Energy Resources Administrator John Chatburn on the huge proposed Gateway West transmission project that would run from central Wyoming to southwest Idaho. The Council meetings are open to the public and additional background information for the various agenda items will be available when the meeting begins.

Norges Bank, which manages the Norway Wealth Fund and is one of the world’s largest investment funds, has included Idaho’s largest electric utility on its list of 52 companies excluded from the government Pension Fund Global due to Idaho Power’s heavy reliance on coal-related energy investments for its power production.

Idaho Power relies on out-of- state coal plants for more than 40 percent of its electricity generation. While the utility has said it plans to gradually ramp down its reliance on coal for power production, the international investment leader determined Idaho Power wasn’t acting

“Norges Bank has decided to exclude 52 companies from the Government Pension Fund Global after an assessment of the new product-based coal criterion,” the bank said in an April 14 statement. “Norges Bank’s Executive Board made the exclusion decision based on recommendations from Norges Bank Investment Management. The Executive Board has found that the recommendations satisfies (sic) the exclusion criteria and that the companies can be excluded from the fund.” Norges Bank is the central bank of Norway and is considered the world’s largest sovereign wealth fund. The $872 billion sovereign wealth fund also made the news earlier this month when it bucked ExxonMobil and Chevron and sided with shareholders demanding the companies be more transparent on their companies’ exposure to climate change risks. IDACORP came under shareholder scrutiny in 2009, when shareholders rejected company opposition and voted to demand Idaho Power develop a plan to reduce greenhouse gas emissions from its coal plants.

Norges Bank’s decision to exclude Idaho Power’s parent company, IDACORP, from its massive Government Pension Fund Global was based on various coal-related criteria. Established by the Norwegian parliament in 1816, the state-owned Norges Bank is not one of Idaho Power’s largest institutional investors, but it is one of the planet’s largest pension fund investors.

► The NW Energy Coalition’s Spring 2016 Clean and Affordable Energy Conference will be held May 19-20 in Missoula, MT. Go to www.nwenergy.org for more information and

► The Snake River Alliance will conduct community workshops for its “Solarize the Valley” campaign through May and June. See above for more details.

► The Northwest Power & Conservation Council holds meetings in May in Boise. See above

► The Idaho Public Utilities Commission will hold its next regular “decision meetings” on May 16 and 31. Meetings normally begin at 1:30 p.m., and agendas are usually posted the day before on the Commission’s website at www.puc.idaho.gov. The meetings take place at the PUC’s Boise headquarters at 472 W. Washington.