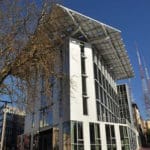 Grist article: How one building is changing the world

It used to be that the Bullitt Foundation “saved the planet” the old-fashioned way, putting its money behind campaigns to spare old-growth forests, stop mines in Alaska, and clean up toxic waste. Not anymore. The Seattle-based foundation, started by local media magnate Dorothy Bullitt, has turned its attention to cities, funding projects in urban ecology, clean energy, and technology.

The much ballyhooed Bullitt Center features a canopy of solar panels that generates all of the electricity used on site; a green roof seeded with micro-organisms that captures and cleans rainwater; giant floor-to-ceiling windows that open and close automatically to regulate the temperature; and a fleet of composting toilets that looks like an army of Daleks in the basement.

And roughly a year and a half after it opened for business, the building is making waves as effectively as any grant could have done.