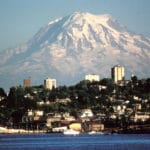 With a snow-capped Mount Rainier as their poster child, Washington businesses have joined forces to take a stand on climate change. More than 100 businesses – from REI and Virginia Mason to Taylor Shellfish and Microsoft – launched a declaration calling for “climate action.” While they didn’t know what the outcome of the November election would be when they came together, their message remains the same. “Tackling climate change,” a declaration from the group says, “is one of Washington’s greatest economic opportunities of the 21st century. And it’s simply the right thing to do.”

In a statement – printed on a blue, gray and white poster, colors most often associated in the Pacific Northwest with bountiful snow pack and water – the group says: “There is a clear and present need for action on climate change to protect our region’s natural assets, vibrant communities and growing economy.”