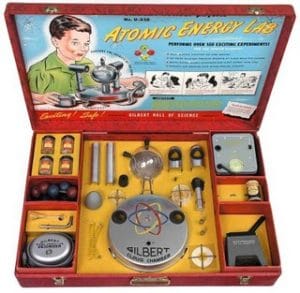 %CODE1%Here’s the Clearing Up piece:

With the Obama administration’s decision to dump
Yucca Mountain as the nation’s nuclear waste
repository, the 15-member commission must come up
with a plan for “managing the back end of the nuclear
fuel cycle”–the end that deals with storage, processing
and disposal of used nuclear fuel, high-level waste, and
other materials from our nuclear activities.

It’s a Sisyphean task–but the fact that it has been at
least assigned to someone to supposedly definitively
solve has once again raised calls for a nuclear
renaissance. In February the Department of Energy
offered $8.3 billion in conditional loan guarantees for
the construction and operation of two new 1100-MW
nuclear reactors in Georgia–expected to be the first new
U.S. nuclear plants to break ground in almost 30 years.

“The nuclear facility is eligible for loan
guarantees because it achieves substantial
environmental benefits by reducing greenhouse gases
and other pollutants,” the DOE news release
announcing the loan guarantee touted.

Even Bill Gates is apparently getting on board.
TerraPower, an energy startup backed by the Microsoft
founder, is reportedly in talks with Toshiba about
developing a small-scale nuclear reactor.

All of this may be making the traditionalists in the
utility industry feel more secure. After all, the Obama
administration has gone on record supporting nuclear
power as a way to reduce greenhouse gas emissions and
reduce our dependence on oil.

And the $8.3-billion loan to the Georgia nuke is just
part of the $54 billion DOE has pledged for new nuclear
plants. Why bother slogging with the development of
multiple energy efficiency and weatherization programs
or small renewables projects when you can churn out
1100 MW of power with just one new nuclear plant–
especially if Uncle Fed is willing to back you up
financially? Why worry about those 2,000 tons or so of
used fuel rods produced each year by the nuke plants
already up and running?

As Steve Kraft of the Nuclear Energy Institute
recently told Reuters, “We have never related the future
of nuclear power to the success or lack of success of any
given used fuel management facility.”

In 2008–well before Yucca was taken off the table–
DOE had given up on its prediction that the site would
be ready to receive waste by 2017, and officials were
quietly acknowledging that the nation already had twice
as much nuclear waste waiting for permanent storage as
Yucca would be able to hold.

With the Blue Ribbon Commission spending up to
24 months to issue its report, you can add another
two years to the delay in finding someplace to
permanently put this stuff.

If we have nowhere to put the spent nuclear fuel
we’re already producing, we have no business
producing more of it.

If that’s not enough to convince you the words
“renaissance” and “nuclear” shouldn’t be paired, other
recent developments should do the trick.

First, there’s Vermont Yankee, which has been
leaking tritium into groundwater–via underground pipes
that plant owner Entergy initially insisted didn’t exist–
and where soil levels of cesium-137 were recently found
to be 3 to 12 times higher than expected. In February,
the Vermont Senate voted over-whelmingly to block
operation of the 605-MW plant beyond 2012, citing the
tritium leaks, inaccurate testimony by company
officials, and other issues.

Next, add Indian Point, another Entergy facility in
Buchanan, N.Y. Earlier this month, New York state
refused to issue the two-unit, 2069-MW facility a water
permit. According to The New York Times, the New York
Department of Environmental Conservation said in an April
2 letter that the plant’s cooling systems, even if modified in
a less expensive way proposed by Entergy, “do not and will
not comply” with New York’s water quality standards.

The letter also said radioactive material from the
plant had polluted the Hudson after leaking into the
groundwater.

Here in the West, Washington state has filed a
petition to intervene in the NRC’s Yucca Mountain
licensing proceeding, opposing DOE’s motion to
withdraw its Yucca Mountain license application.
Taking Yucca out of contention will set back efforts to
clean up nuclear waste at the Hanford Nuclear
Reservation, state AG Rob McKenna pointed out in
announcing the petition March 3.

Don’t forget that Washington state has already settled
another lawsuit against DOE, for missing
deadlines for cleaning up the waste at
Hanford reservation. The state and the
feds reached a deal in that case last year,
with promises that all the waste would be
cleaned up by 2047. But that stuff–about
53 million gallons stored in 177 large
underground tanks–was supposed to be
moved to a federal waste repository–Yucca–starting in
about 10 years. Now it has no place to go, either.

Meanwhile, about one-third of those tanks are
known or suspected to be leaking and have already
released about 1 million gallons of waste into Hanford
soils. Hanford doesn’t have the storage capacity on site to
retrieve the waste from those tanks until the waste treatment
and disposal process is underway, the state said.

At the same time, Energy Northwest, which operates
the Columbia Generating Station, is one of 16 utilities
that have joined the Nuclear Energy Institute in suing
DOE to suspend collection of a nuclear waste
management fee that’s supposed to cover the cost of
long-term disposal of said waste. At this point, the
disposal fund has a balance of over $24 billion. Since
DOE doesn’t have a nuclear waste management plan,
companies should no longer have to pay the fee, the suit
argues. The National Association of Regulatory Utility
Commissioners has filed a similar suit.

In the Pacific Northwest alone, nuclear power plants
are storing over 2,000 metric tons of uranium. While
this and the rest of the already spent fuel from the
and in dry storage at 46 independent spent fuel storage
locations, and no permanent repository is in sight, the
time seems ripe for putting more of our energy and
effort into alternatives to nuclear power.

A recent study from the National Research Council
offers more support for one good alternative–spending
as much time and energy on weatherization and
efficiency as we’ve spent fighting over nuclear waste
disposal. According to Real Prospects for Energy
Efficiency in the United States, if the U.S made an
accelerated effort to employ a variety of efficiency
technologies in the building, industrial and
transportation sectors, we could reduce our energy use
by 30 percent by 2030 and eliminate the need for new
electric power capacity through 2030.

That’s fully adopting technologies that already exist
or are likely to be developed in the near
future. The strategy could lower projected
U.S. energy use by 17 to 20 percent by
2020, and up to 31 percent by 2030.

If we fully implemented the cost-effective, energy-
efficient technologies referenced in the National
Research Council report, those numbers would fall to
89-92 quads in 2020 and 82-88 quads in 2030.

Just looking at 2020, the difference between 111 and
89 quads is 22 quads. According to the Northwest
Power and Conservation Council’s Jeff King, it would
take 787 Toshiba/Westinghouse AP1000 nuclear plants
to produce that much energy. We couldn’t build that
many nuke plants in 10 years anyway, regardless of how
the Blue Ribbon Commission handle the waste issue.

If we expand the horizon to 2030, the utility industry
and policy makers would have 20 years to tighten up the
building, industrial and transportation sectors and also
seriously concentrate on improving and expanding
renewable energy technologies.

It’s a cliché, but the utility industry really does need
to think outside the (nuclear) box. It’s over-flowing with
nuclear waste [Jude Noland].

Posted in Energy Efficiency, News
← How did Clean and Affordable Energy do this session in Washington State?BC Environmentalists criticize Site C dam proposal →