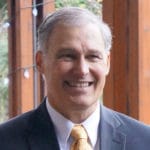 On Wednesday, Washington Gov. Jay Inslee unveiled a suite of proposals that would increasingly limit carbon pollution in the state and make major polluters pay for the carbon they do emit via a market-based allocation system.

Revenues from the pollution permits – estimated at $1 billion in the first year – would go to transportation, particularly transit and electric vehicle incentives and infrastructure; relief for low-income communities; and education, to help meet court funding mandates.

The point is to reduce fossil fuel use to meet legislatively adopted climate pollution limits and hold polluters accountable while building good, local jobs in the new clean energy economy. This package balances the costs of reducing pollution with protecting our most vulnerable citizens and businesses. Of course, Washington residents are already paying the costs of doing nothing.

Passing Inslee’s legislative proposals during the 2015 session will be challenging, so it is more important than ever for energy advocates to make their voices heard. Please take a moment to tell your legislators to support Gov. Inslee’s climate action plan.

For more information, including links to various studies and analyses underpinning the proposals, go to the governor’s press release.

The NW Energy Coalition is supporting these exciting steps toward a clean and affordable energy future for all of us. Again, please tell your legislators that now’s the time to take action on climate, solar, energy efficiency and other clean energy policies.