This Transformer concludes our 2-part series on the Sixth Northwest Power and Conservation Plan.

Part I looked at the plan’s prescription for meeting most future electricity needs with inexpensive energy efficiency and at its treatment of coal use, climate change and salmon recovery. It considered the resulting costs, rates and bills issues and explained the four resource scenarios the Northwest Power and Conservation Council modeled for determining and satisfying growing power needs.

This edition of The Transformer compares the findings of the Sixth Plan to Bright Future, the NW Energy Coalition report that shows how the Northwest electric power system can affordably meet rising power needs while fulfilling its climate and wildlife-protection obligations.

In early 2009, the NW Energy Coalition (in conjunction with Save Our Wild Salmon and the Sierra Club) produced its Bright Future report, presenting our vision and documenting the practicality of realizing a Northwest electric system that satisfies its climate responsibilities while meeting new power demands and helping to recover wild salmon populations that federal dams – especially the four Lower Snake River dams – have pushed to the brink of extinction.

Bright Future was written, in part, to help the region’s official power planning agency, the Northwest Power and Conservation Council focus on:

The Council’s Sixth Northwest Power and Conservation Plan, released in February, and some of its underlying analyses closely mirror Bright Future’s findings and in many ways improve upon them.

Most strikingly, both Bright Future and the Sixth Plan find that most of the region’s load growth can be met with low-cost, pollution-free energy efficiency.

When Bright Future was released, utility insiders challenged its assumption that the region can acquire about 340 average megawatts (aMW) of energy efficiency each year at an average cost of about 4 cents per kilowatt-hour. The Public Power Council and the Pacific Northwest Utilities Conference Committee (PNUCC), representing most of the utilities in the region, said that level of achievement was unrealistic and undoable and estimated that only about half that amount of cost-effective energy efficiency would be available.

But when the Council did a measure-by-measure compilation of realistically achievable conservation potential, it found about 6,000 aMW over 20 years, about 300 aMW per year, costing an average of only 3.6 cents/kWh. That’s pretty close to Bright Future’s 340 aMW per year. To their credit, utilities that have thoroughly examined the data now see the Council’s numbers as reasonable. Though they remain skeptical of the acquisition rates, their opposition to the Sixth Plan efficiency targets has moderated considerably.

Bright Future also finds that replacing the power from the four lower Snake River dams would neither cripple the economy nor require building thousands of megawatts of new fossil fuel generation. Bonneville Power Administration, Northwest RiverPartners and others called that a fantasy and argued that dam removal would raise rates drastically and/or cause the lights to go out.

But again, analysis of Council data and scenario modeling confirms that removing the dams is both doable and affordable. Critics have overlooked two determinate factors: the way population growth absorbs costs and the relative importance of the four dams’ output.

Of load growth, population and bills

Council projections show costs rising under all resource scenarios, with most costs associated with acquiring the new efficiency and power generation needed to meet growing electricity needs. But because energy efficiency costs even less than today’s average power costs, the average cost per kWh barely budges. Under the Sixth Plan’s preferred scenario, those new costs reach about $4.4 billion per year by 2030 if carbon costs are included, or about $3 billion/year if those costs are considered transfer payments (see endnote No. 2).

But the Council expects regional population to grow at a rate more than double that of costs (1.2% and 0.5% respectively), so the relatively small new costs will be spread among more customers, resulting in a net lowering of bills.

The cost of power to replace the dams’ production or that of phased-out coal plants must be seen in the perspective of that $3-4.4 billion per year (depending upon CO2 treatment) in additional costs required to meet load growth. Power replacement for the lower Snake dams would cost about $500,000; coal power replacement would cost about the same.1These are very small numbers compared to the cost of load growth, and even smaller in the context of the electric system’s total yearly costs. The following graphic from the Sixth Plan clearly illustrates this reality.2 It is almost impossible to see any difference in typical monthly residential bills under the various scenarios. 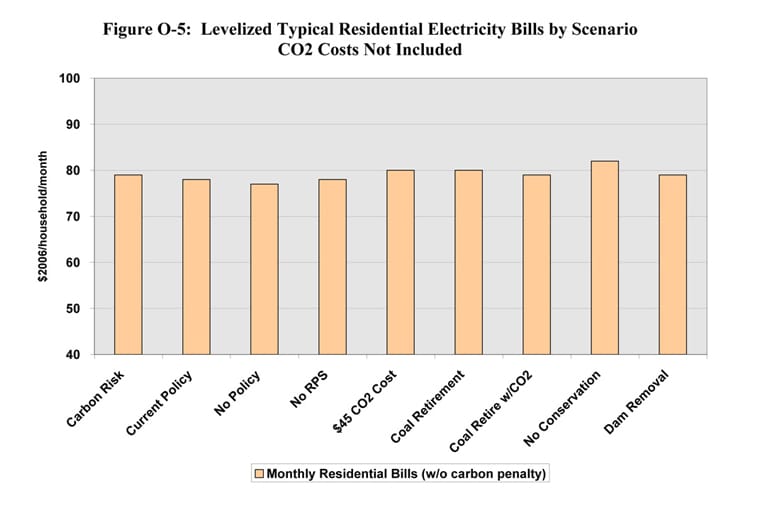 The Council’s “Dam Removal” scenario (far right of the above graph) is the closest analog to Bright Future’s all-inclusive analysis. The Council approaches the issue from a different direction, and its analysis benefits from the agency’s far greater computing capacity. But the results are remarkably consistent, despite some differing assumptions.

Context is critical. Neither the Council nor Bright Future considers the dams issue in isolation from the overall climate challenge:

Both Bright Future and the Council scenario show the region can meet power, climate and environmental stewardship goals affordably and without going on a fossil-fuel building binge. The Bright Future analysis results in slight bill increases (around 6/10th cent per kWh), but the Council’s prediction of expanding population amid falling per-household and per-business power use results in bill reductions of almost exactly the same amount.

The Council also improves on Bright Future by making a quantitative estimate of the new jobs that building our clean energy future would create. The Council foresees 47,000 new jobs by 2030, all but 5,000 resulting from increased spending by electricity consumers whose power bills have fallen.

How, one might ask, can the Council’s dam-removal analysis result in overall reductions in customers’ bills? After all, the Sixth Plan shows (figure 10-18) $530 million a year5 cost increases for replacing the dams’ power and states that “dam removal would cause an increase of 24 percent to 29 percent” in Bonneville’s priority firm rate.6

The answer begins with the truism that families and businesses pay bills, not rates. That certainly applies to BPA’s wholesale rates. The amount public utilities pay Bonneville for power at the priority firm rate is just one component of consumers’ bills, and its role will shrink in the future. That’s because utilities add to their power purchase expenses their ongoing costs for transmission and local services (wires, poles, trucks, meters, etc.), plus the substantial costs of serving new loads. Thus, even a sharp increase in Bonneville’s rate has little impact on families’ and businesses’ bills.

Finally, it is important to recognize that the Council’s rates and bill projections are region-wide averages. In practice:

These two costs — replacing the power from dam removal or from coal phase-out — are relatively equal, as are the number of investor-owned and public utility customers across the region. Thus, the Council’s “average” bill impacts should apply pretty much across the board.

Miles to go before we sleep

The Sixth Northwest Power and Conservation Plan goes where no plan has gone before. It confirms and in several instances improves upon Bright Future’s analysis of the costs and availability of new clean resources – energy efficiency and renewables – to meet new power needs.

Its dam-removal and coal phase-out studies show the Northwest power system can affordably fulfill its responsibilities to revive wild salmon (and the salmon economy) and to combat global warming. Ironically, adherence to the Sixth Plan would keep carbon emissions at today’s level. The regional power system’s climate emissions would not drop at all, let alone to the levels that Montana, Oregon and Washington state are committed. The Council deems carbon restrictions a potential cost risk utilities should consider – not part of a legal and moral imperative to do what’s necessary to avert the worst consequences of climate change. As yet, the Council is unwilling to be more explicit in directing BPA and utilities to reduce emissions and fulfill their environmental stewardship responsibilities.

Five years from now, we expect the Seventh Northwest Power and Conservation Plan to set carbon reduction standards and salmon-restoration goals in line with current science. In the interim, clean-energy and public-interest advocates will work with state legislatures, utility commissions, state agencies, local governments and individual utilities to realize the Sixth Plan’s efficiency and renewable energy targets. And, bolstered by the Council’s findings on phasing out coal and recovering salmon, we’ll push the region farther down the road to a clean, affordable, bright energy future.

1These numbers come from the “spinner graphs” on the Council’s website. For guidance on finding and interpreting these rather complex output files, contact Steve Weiss at steve@nwenergy.org. The information is graphically displayed in Chapter 10 of Sixth Plan in Figure 10-8, which shows the year-to-year cost increases of several scenarios. The carbon risk scenario, which the Council considers most likely, would add about $4.4 billion to annual costs. The scenario incorporates the costs of CO2 emissions penalties and those of replacing the power from coal plants phased-out in response to carbon costs, but does not reflect dam removal. Comparing the 2021 values (the year after the coal plants are closed in the analysis) from the current policy and coal retirement without CO2 scenarios — neither of which contains carbon costs — reveals a cost difference of about $500 million/year. The dam removal cost comes from p. 10-30 of the Sixth Plan. Back to article

2The legend “CO2 Costs Not Included” means that in this analysis utilities face the price signal of a CO2 penalty, but that the revenues received are given back to customers. This also would apply to a carbon control regime that provides allowances for free. Back to article

3Bright Future, p. 5
Back to article

5The Council’s cost figure assumes court approval of the federal government’s proposed 2008 Biological Opinion’s proposed flow and spill regime – unlikely given the fact that an injunction now governs hydro operations on the Snake River. The injunction requires more spill and flow to help migrating salmon and steelhead than called for in the still-illegal BiOp; BPA’s existing rates reflect the injunction requirements. From this proper baseline, costs for replacing the dams’ power come to $470 million per year, not the $530 million cited in the Sixth Plan. This error does not change the results significantly. Back to article

6Also known as the preference rate, the priority firm rate is what Bonneville Power Administration charges its publicly owned utilities for federal power. Starting in October 2011, this rate will be officially called the Tier 1 rate. Back to article