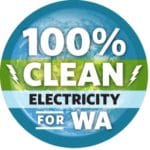 To learn more about the bill or to become involved in the campaign to win passage, please email Kat Plimpton, Outreach Manager at the NW Energy Coalition.

Olympia, WA – The Senate Environment, Energy and Technology committee held its first hearing to an overflow crowd on Senate Bill 5116, which would move Washington State to 100 percent clean electricity.

Notably, Seattle City Light testified in support of the policy, and others’ testimony mentioned utilities including Excel Energy that are moving towards 100 percent clean energy around the country.

“We believe that moving towards zero carbon electricity grid is achievable at an affordable cost and this is already happening in the marketplace,” stated David Van’t Hof representing National Grid Utility during his testimony. “. . It would be great for the rural economy, great for labor and jobs, and great for carbon free electricity in Washington.”

Panelists also including several unions, including the Brotherhood of Electrical Workers and UFCW21 as well as clean energy businesses. Electrical tradesmen and solar businesses stand to gain workforce development opportunities and significant project opportunities with the passage of SB5116.  The solar and wind sectors are the fastest growing in the country according to the U.S. Department of Labor.

“[This policy will]. . .create thousands of jobs and a number of large industrial projects [and] support the workers who will make this policy a reality,” testified Matthew Hepner of IBEW as he urged lawmakers to support SB5116.

Governor Inslee has made SB5116 governor request legislation.  The Department of Natural Resources and several local elected officials also testified in support of the policy.

Councilmember Nancy Tosta of the Burien City Council asked the state for help and to “do what’s necessary” in “addressing how our utilities provide us the energy we use. I ask that you commit to our children’s future by insisting on clean energy, as aggressively as we can get there. Tosta also focused on addressing inequity and supporting the local economy saying, “Support a workforce and development of clean energy jobs and understand that addressing inequity requires that the focus is not only economic, but a clean healthy environment.”

“We have joined the Port of Seattle and fifteen King County cities to set a shared goal of reducing greenhouse gas emissions of 50% by 2030 and eighty percent by 2050. . .   We’d look at what it would it take to achieve our shared climate goal, and cleaner electricity supplies are essential.”  stated Megan Smith, Director of Climate and Energy Initiatives, who spoke on behalf of King County which is a member of the King County-Cities Climate Collaboration (K4C).

Throughout the hearing, many panelists stated the need to address historic inequities for lower income households while moving our electricity sector to 100 percent clean.

The Washington State House Environment and Energy Committee will have a hearing on the companion bill (HB 1211) on Tuesday, Jan. 22 at 3:30 pm.

The Environmental Priorities Coalition is made up of more than 20 statewide organizations working to safeguard our environment and the health of our communities in the legislature. For the 2019 legislative session, we have adopted four priorities essential for healthy communities and a thriving environment. Download a PDF factsheet about them here.