August is usually a time to take things easy, maybe go on vacation and enjoy our beautiful Northwest. But sometimes the weather just doesn’t cooperate. This year, that was the case in the middle of August, when a massive heatwave – really, a heat storm – descended across the western states, including the Pacific Northwest.

With air conditioning cranked up to keep homes and other buildings safe and comfortable, power usage on the western grid escalated to near-historic levels. In the early evening on August 14 and 15, with temperatures almost to 100 degrees in San Francisco, and far hotter inland, several hundred thousand California customers had their power cut to avoid an uncontrolled blackout. See Fig. 1.

On the following days and again in September, over Labor Day weekend, the weather was just as hot, and power demand was projected to be even higher. Yet the lights stayed on in California, in part because the Northwest sent all the power we could during the peak hours. See Fig. 2.

Immediately a cry arose that the four lower Snake River hydro dams saved the day and that without them, the lights would go out in our own super-peak conditions in the Northwest.

But is that really true? When NWEC examined the data, we found that this is the time of year when the Snake River is near its lowest point, and the dams simply can’t produce very much power.

In the future, the dams will provide even less of our growing summer power needs. As climate change increases temperatures and decreases flows in the Snake River, there is even more pressure on the endangered salmon, which need cool and fast water to migrate and survive.

This year’s massive heat waves will, unfortunately, become more common. Power usage will continue to increase throughout the hotter months, but a balanced mix of clean energy sources can provide the supply we need and let the lower Snake River flow freely to support the protection and recovery of salmon.

Let’s start with the big picture. In August, temperatures across the west soared for over a week. Utilities everywhere increased power generation to meet the need. But the California Independent System Operator (CAISO), which manages more than two-thirds of the state grid, had a dilemma: the anticipated power supply was not quite enough to meet spiking demand. If the power supply fell short, an uncontrolled or “cascading” blackout could not only spread across the state but also put the entire west at risk, since we are all connected together on a single electrical grid.

The CAISO and California utilities did all they could to round up emergency power supplies, industrial load reductions, and voluntary conservation, but at sunset on August 14 and 15, there just wasn’t enough. As a last resort, in accordance with electric system reliability standards, the CAISO required utilities to reduce demand enough to keep the system in balance, and several hundred thousand customers had their power cut for up to an hour and a half. Later, as the evening cooled, the rest of California’s power demand went down, and the lights came back on.

Peak demand was expected to be even higher in the following days and again over Labor Day weekend. Yet, California experienced no additional “rotating outages” for three key reasons: (1) solar generation performed well and helped ride through the hottest weather until sundown; (2) voluntary conservation and managed load reductions reduced peak demand by as much as 8%; and (3) the Northwest filled the massive Pacific Intertie transmission system to capacity, sending over 7,000 megawatts (MW) of power to California when it was most needed.

A Tale of Two Rivers

Federal hydropower in the Northwest is generated at more than 31 Army Corps of Engineers and Bureau of Reclamation dams and marketed by the Bonneville Power Administration. Most of the BPA hydro, including from the lower Snake River, serves public power utilities in the Northwest under long term contracts.

In Fig. 3. we can see how hydro generation peaks to meet winter power needs and again in the spring when the snowpack melts (see the blue trace in the chart). By early August, river flows have fallen dramatically. Yet generation from the lower Snake River dams (the orange trace) makes up only a small fraction of total BPA hydro generation. By August, its contribution has fallen even further. That’s because the Columbia River has over 30 million acre-feet of upstream storage, while the Snake River only has about 2 million acre-feet. 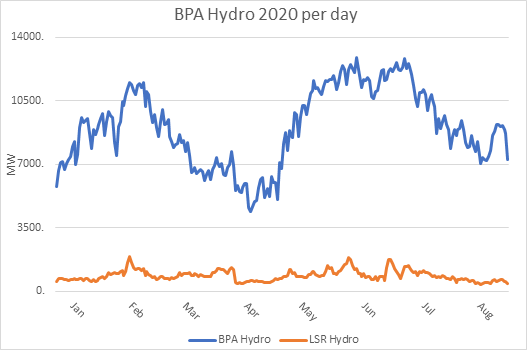 As a result, with very little water coming down both rivers in August, the Columbia River dams can rely on upstream storage from the spring runoff, and the Snake River dams mostly can’t – they are nearly pure “run of river.”

One of the key benefits of hydropower is flexibility. Fig. 4 shows how BPA dramatically shifted the generation pattern in mid-August to meet the Northwest and California’s peak power needs in the late afternoon and evening. 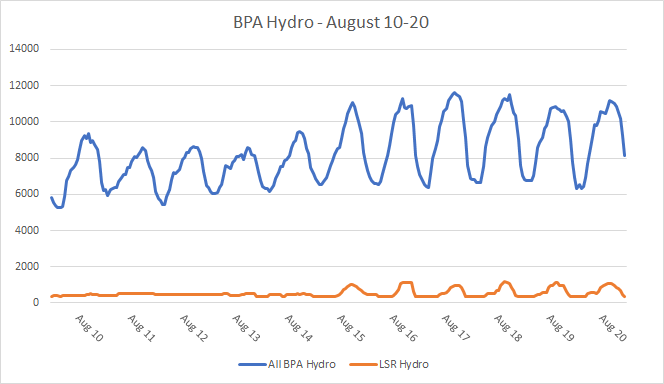 A Question of Balance

The lower Snake River dams – Lower Granite, Little Goose, Lower Monumental, and Ice Harbor – aren’t just less flexible; they pose a substantial and growing threat to fish. The dams violate state water-quality temperature standards for salmon migration for several weeks each summer. So, as climate change makes the Northwest hotter, we’ll have more years like 2015, when the “hot river” killed almost all of the returning endangered Snake River sockeye salmon – in part because the dams made the water slower and warmer. See Fig. 5. for map of dams throughout the Columbia River Basin. 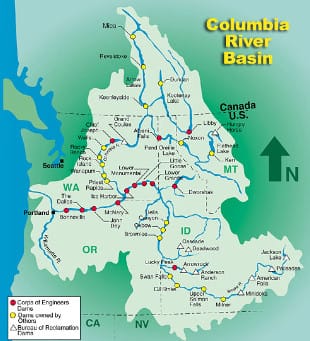 Dozens of peer-reviewed scientific studies show that the most crucial step to protect salmon in hot river conditions is to give them faster and cooler water.

That’s why NWEC supports serious discussions in the region to adopt a long-term strategy to restore endangered fish populations. To succeed, we think that requires a deep and comprehensive evaluation of retiring the four lower Snake River dams. But what would that mean for our power system? Would our grid be less reliable, or even have the lights go out?

To answer these questions, in 2018, the NWEC commissioned a study from a respected research firm, Energy Strategies. Using the best available models and data, the study showed that we can replace the Lower Snake River hydropower with clean energy. This would include solar, wind, demand response, storage, and energy efficiency.

Since 2018, clean energy costs have fallen much further, and the stakes of climate change have increased for salmon and for us. The data shows that the lower Snake River dams play a limited and declining role in the Northwest energy system.

We have a unique opportunity to examine our energy grid and develop more resilient solutions. Our interdependent grid will continue to support California and the Pacific Northwest during high peak seasons. What we need to consider now is how we can share these resources and meet demand. We can do this by putting in place the clean and diverse energy systems that mutually benefit California, the Pacific Northwest, and the lower Snake River’s salmon population.