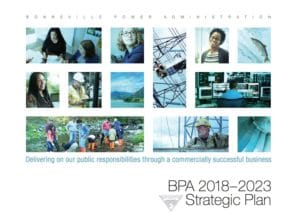 Yesterday, the Bonneville Power Administration released its 2018-2023 Strategic Plan that lays out the agency’s goals as it works to adapt to an increasingly complex and competitive electricity market.

The NW Energy Coalition congratulates BPA for establishing four important overarching goals in the new 5-year plan. They are:

To these four goals, we would add a fifth — Fulfilling public interest and environmental obligations. This additional goal would elevate the importance of two imperatives the plan already recognizes – restoring fish and wildlife populations and supporting energy efficiency and demand response programs. To those items we would add the need to work with Tribal Nations, Northwest states, customers, and stakeholders to support rural, low-income, and other underserved communities.

The challenge BPA faces will be to find the resources necessary to do these things and innovate in areas such as grid modernization and transmission at a time when revenues are expected to grow only at the rate of inflation and the effort required to maintain aging assets continues to increase.

Part of the solution is for BPA to better manage costs. Meanwhile, BPA’s plan to develop new energy products that offer customers greater flexibility will help on the revenue side. And BPA is to be congratulated for its new effort to improve transmission options for the region, particularly those that hold the promise of opening up west coast markets to wind and solar power from Montana. That effort will not only contribute to the development of clean renewable resources at a time when coal generation is being pulled off the market, it will allow BPA to retain and increase the revenue it receives from transmission services.

“In the last year, BPA has really helped clarify and understand transmission issues,” said Fred Heutte, senior policy associate at the NW Energy Coalition. “Now they’ve created a process that should result in new transmission products and also streamline the applications process, which will be a big help to renewable generation companies.”

Improved transmission options will also contribute to grid modernization and allow utilities to more easily assimilate new renewable resources, resulting in a more flexible and reliable electric system that will continue to be buttressed by BPA hydropower.

That happy outcome will be made more likely if BPA also strengthens its efforts in the area of energy efficiency and demand response. Whether that will happen remains to be seen since, in recent years, BPA has tried to limit its investment in energy efficiency, a strategy we believe is short-sighted because energy efficiency programs work to keep system costs down over the long term.

BPA also needs to strengthen its efforts to restore fish populations and meet its legal responsibilities under the NW Power Act and Endangered Species Act. BPA is fully participating in the NEPA (National Environmental Policy Act) process that was ordered by a federal judge after he deemed the Federal Columbia River Power System biological opinion to be inadequate and in violation of federal law, with special concern for the operation of four lower Snake River dams.

“The problem is that BPA’s current efforts to restore salmon populations just aren’t working,” explained NW Energy Coalition executive director Nancy Hirsh. “And, as Judge Simon said in his order, compliance with the law means considering all viable options, including dam removal. The good news for BPA and the Northwest is that, when they do consider dam removal, we think they’ll find there are clean and affordable energy options.”