I-1631, the clean air and clean energy measure, is critical for addressing climate change. Yet, a lot of loud voices are claiming the proposed carbon fee on fossil fuel polluters won’t do have much effect and costs will be passed through to customers. But, if they believe that, then why are the polluters — big oil companies — spending upwards of $22 million to defeat I-1631?

They’re spending that much money because they know I-1631 will cut pollution and greenhouse gas emissions and they know that, when given the opportunity, the people of Washington have a successful history of driving momentous and beneficial changes to our energy system. Those changes, like the ones that I-1631 would bring about, were ferociously opposed by big oil and industry, but they gave us the foundation upon which we’re building today.

Chapter one: Saying “no” to nukes and “yes” to energy efficiency

From the 1979 Washington Voter’s Pamphlet

The choice at the time for municipal utilities was stark. They could meet growing demand for energy by throwing tens of billions of customer dollars at five nuclear plants proposed by the Washington Public Power Supply System – aka WPPSS (which eventually went bankrupt after incurring more than a billion dollars in debt for which we had to pay). Or, they could treat energy efficiency as an energy resource and meet the need by embracing conservation measures such as weatherizing homes and improving lighting.

Studies showed that increased energy efficiency was not only the most cost effective resource, it also enabled customers to lower their monthly bills and make their homes and workplaces healthier and more comfortable. 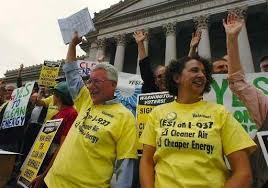 Sam Garst and friends celebrate I-937 qualifying for the ballot in 2006.

Washington’s next major turn in clean energy was in 2006 when the state’s voters passed Initiative 937, creating Washington’s first-ever requirement that utilities acquire power from clean, renewable resources as well as energy efficiency.

I-937 had to be enacted via the citizen initiative process because, after six frustrating years of trying and failing to pass a clean energy standard in the legislature, an alliance of citizens led by the NW Energy Coalition organized and took the issue to the people.

The same polluters who oppose I-1631 opposed I-937 making the same claims –that prices would skyrocket, that jobs would be lost, that pollution would be significantly reduced.

And they were wrong.

The benefits promised by the energy activists, businesses, students, and environmentalists who propelled I-937 to passage have all been realized. I-937 motivated our state’s large electric utilities to invest in solar, wind and even more energy efficiency, helping to clean up our electric system while keeping monthly bills affordable and spurring the growth of a clean energy businesses that continue today to be among our biggest job creators. 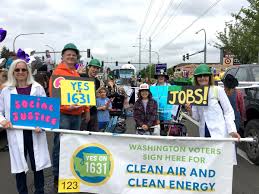 Then as now, the status-quo’ers said our proposals would be costly, dangerous to our energy industry, and ineffective. And both times the result was the opposite.

Now, with the recent UN report on climate impacts being more dire and more imminent, we have an even harder change to forge. But we can do it .

Initiative 1631 is the right choice because it is in the public interest.

The oil companies use their vast resources to serve only their own interests – not those of Washington, its people, and the planet. They’ll keep trying to scare us and smear us as too young, too naïve, too radical and all the other arguments they have to rely on because the facts aren’t on their side.

We, on the other hand, have the facts on our side – the side of clean energy, a healthy planet, and shared prosperity.