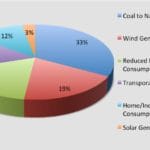 In 2005, annual emissions of CO2 in the US reached an all-time high of just under six billion tons. By 2016, emissions had declined by 14% from that peak and by 18% when adjusted for growth in population and economic activity.

How have we done it?

Zeke Hausfather provides a detailed look in an August 15 article in “Carbon Brief”. But, in summary, three factors are driving the decline:

We must do better in transportation

Natural Gas is a contributor to savings today, but will be a barrier going forward

Compared to coal, natural gas looks good. Of course, just about anything looks good compared to coal. Burning natural gas to generate electricity produces half or more of the carbon emissions that come from coal, which means that, although it’s better, natural gas is still a major polluter raising the question of how heavily it should be used, under what circumstances, and for how long?