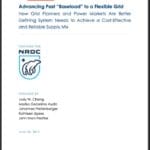 Debunking the myth of "Baseload Power"

The anachronism behind the upcoming DOE grid study

When Energy secretary, Rick Perry, issued a memo last April instructing his department to study “how certain policies are affecting, and potentially putting at risk, energy security and reliability”, he flatly stated that “baseload power” provided by coal, natural gas, nuclear, and hydroelectric generation, “is necessary to a well-functioning electric grid”. He then called environmental regulations and “market-distorting” subsidies that support new renewable energy resources threats that are creating “acute and chronic problems for maintaining baseload generation”.

Rick Perry clearly believes that baseload power – electricity provided by resources that are really big, for which fuel can be stockpiled, and that run 24/7 — is really important.  But, is it? Especially when coal and natural gas are massive contributors to various forms of pollution including gases that drive climate change.

A new study, conducted by the Brattle Group for the National Resources Defense Council, calls Rick Perry’s belief in the indispensable nature of baseload power archaic – an artifact from a time before the rise of new renewable resources and advanced grid management technology, created an environment in which flexibility, not size, is the bettor guarantor of to system resilience and reliability.

The Brattle study clarifies the origins of Rick Perry’s and others’ nearly dogmatic faith in the concept of baseload power and then methodically describes the evolution of the electric grid that is rendering the concept anachronistic. It describes how in the present-day flexibility and integration are providing reliable energy and doing so in a way that is both cleaner and more affordable.

Finally, the study describes how policies, markets, and incentives should be aligned to enable the ongoing evolution and transition to a cleaner grid primarily powered by fuel-free renewable energy.