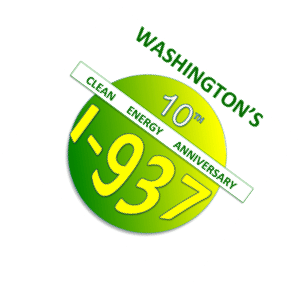 This year, as we celebrate the 10-year anniversary of Initiative 937, Washington has a vibrant economy, one of America’s cleanest electric grids, and electric rates that are nearly the lowest in the nation. That would have been hard to imagine if you were listening to the critics of I-937 as it came to a vote in the fall of 2006.

ings were lurid. Critics charged that behind the veneer of a pleasant-sounding name – the Clean Energy Initiative – lurked a monster that would cause electric rates to skyrocket and jobs to evaporate as businesses and consumers struggled to pay suddenly onerous utility bills.

We were warned that state utilities would be unable to meet I-937’s mandate that they produce 15% of electricity from new eligible renewable resources. They would be forced to choose between paying hundreds of millions of dollars in fines or sourcing renewably generated electricity on the open market where Washington would be vulnerable to volatile comodity prices.

In either case, the critics said, added costs would be passed on to customers, burdening those least able to pay, destroying jobs, and permanently compromising Washington’s business climate.

These dire predictions were largely based on a Washington Research Council brief titled, “Initiative 937: Tilting Towards Windmills”, which predicted that the initiative’s passage would cause utility rates to increase by between 4% and 8% costing Washington customers between $185 million and $370 million annually. 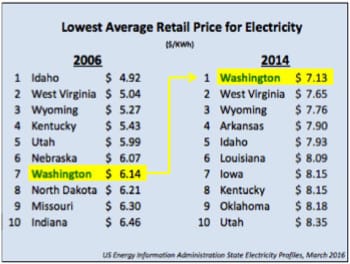 But, Washington voters set aside the warnings of opponents, which included The Seattle Times and most other newspapers in the state, allowing I-937 to be enacted. They also allowed reality to replace the Washington Research Council’s econometric model. At that point, something remarkable happened.

Washington utility prices rose so modestly that the state, which had the nation’s seventh lowest average retail electric price at the time I-937 was passed, soon became #1 in the competition for lowest price. And, in 2013, a study commissioned by the state and conducted by the independent consulting firm, Leidos, determined that of all federal and state policies, I-937 was making the single greatest contribution to the reduction of greenhouse gases and that it would continue to be a major contributor through the end of the study period in 2050. 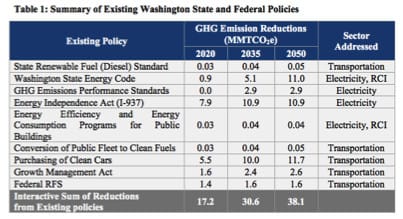 Why were the Research Council and other I-937 opponents so badly mistaken in their predictions? First, they vastly underestimated the volume of new eligible renewable energy that would soon be available as well as a corresponding plunge in costs. Just as importantly, they failed to account for gains in energy efficiency, which slowed growth in electricity demand.

As a result Washington achieved the least expensive electricity in America, cleaner air and water, and a significant reduction in emissions of greenhouse gasses that drive climate change.

In the next installment, we’ll recall the campaign to pass I-937.

Posted in News, Policy, Uncategorized, Washington
← “Charge Without a Cause” : The new fee electric utilities want to impose on residential customersPay for Performance Energy Efficiency Workshop 10/24 →