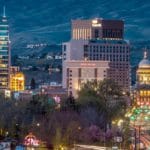 A region finding its way to a clean energy future

At a time when the federal government seems poised to reverse policies designed to reduce pollution, cut greenhouse gas emissions, and encourage renewable energy, the responsibility for achieving those goals is falling to states, regions, cities, and towns.  The Spring 2017 Clean & Affordable Energy Conference featured speakers and panelists from government, industry, and advocacy organizations who collectively demonstrated that great progress can be and is being made in the Northwest despite the ill winds emanating from Washington DC.

How bottom-up change is trumping top-down policy
Boise, Idaho isn’t a big place, but it’s thriving and there are hundreds of cities around America that, like Boise, have the capacity to harness public passion and market forces to make a big difference in the fight against climate change.

That was the message of keynote speaker Steve Burgos, Boise Public Works Director, who showed how Boise’s multi-front effort to achieve energy efficiency is driving reductions in energy consumption even as the Boise grows rapidly. Speaking at the Grove Hotel, which like many new buildings in Boise is heated by geothermal power, Burgos described a city-wide commitment to energy efficiency that includes building code upgrades, the construction of new high-efficiency fire stations and administrative buildings, and soon a new Energy Efficiency Master Plan that will prioritize efficiency efforts and capital investments.

The power of the strategy that Burgos described is beautifully revealed at LIVBOISE.ORG where the harmony that Boise is achieving between sustainability, economic growth, and vibrant communities is thrown into high relief.

Burgos’ point that good environmental policy is also good economic policy carried over into the day’s first panel that explored how removal of the four lower Snake River dams that have had a devastating effect on salmon populations.  After a presentation by Kevin Lewis of Idaho Rivers United that illustrated the likely effects of climate change on the region’s precipitation and temperature and the challenges they would pose for salmon, Sam Mace of Save our Wild Salmon pivoted to the economic impact of the dams on the the region and upriver communities such as Lewiston, Idaho and Clarkston, Washington. Acknowledging that the dam system was once played an important role in transporting grain and other commodities, Mace noted that freight traffic on the river has declined by more than 70% in the last two decades.

Meanwhile, economic and population growth in Lewiston and Clarkston has stagnated or even gone into decline.  Local resident Dustin Aherin, who operates a river tourism business and whose family’s roots in the region go back more than a decade, described the effects on those communities and reported that a recent study showed that the region recieves only a fifteen cent return on the dollar for the more than $500 million a year that are spend on dam maintenance.  Aherin isn’t the only one noticing.  He pointed out that, for the first time, Lewiston city council members have submitted a letter to the US Army Corps of Engineers and the Bonneville Power Administration asking questions about the continued value of the dams and how alternative solutions might affect Lewiston.

The mere fact that leaders in Lewiston and Clarkston are considering alternatives to the four lower Snake River dams represents an important step forward since environmental and clean energy advocates are confident that economic concerns with respect to possible dam removal can be addressed.  Mace described how much of the freight currently shipped by barge can be transitioned to other transportation methods, including rail, and the opportunities for infrastructure development that would be created.

The question that always haunts removal of the four lower Snake River dams as well as efforts to resist expansion of electricity from natural gas is whether the electric system can continue to be reliable and affordable without them.  That was the topic for the day’s second panel on utility portfolio development featuring Phil DeVol of Idaho Power, Ben Otto of the Idaho Conservation League, Ralph Cavanagh of the Natural Resources Defense Council, and Kristine Raper of the Idaho Public Utilities Commission.

The focal point of the discussion was the challenge of aligning utility business models and incentives with public policy and environmental goals and with legislative mandates that public utility commissions pursue “the least expensive option to customers” when considering proposed utility resource plans.

Hope was expressed by DeVol who pointed out that reliability, affordability, and deep decarbonization haven’t always fit together, but increasingly they do.  It’s a trend driven by recent steep reductions in cost for energy from new renewable resources and by the possibility of changes to rate structures that provide appropriate incentives for utilities — a cause championed by Cavanagh who, with commissioner Raper, discussed a variety of hypothetical policy and rate changes, including a need for increased regionalization of the electric system to take advantage of resources throughout the Northwest and California.

The take-away is that, while challenges to fully integrating renewables exist, because markets and public sentiment is pushing legislators, regulators, and utilities in that direction, progress isn’t only possible, but likely.

Both Barker and Johnson who have spent considerable parts of their lengthy careers immersed in legislative and regulatory processes were unintimidated by initial reports of wholesale attacks on environmental policy coming out of DC.  Citing the Trump administration’s preliminary “skinny budget” that summarized administration priorities for spending and that included major cuts to the Environmental Protection Agency and the Energy Department, Barker argued that the document was not likely to play a major role with congressional appropriators.

Rick Johnson reinforced the point by pointing out that state environmental departments and programs are heavily dependent on federal funding and that representatives from those states — even Republicans — would be loathe to approve budgets that would severely cut back services to their constituents.  Meanwhile, the effects of changes to federal policy brought about by executive orders can in many cases be counteracted at the local level where, Johnson argued, the public and business are far ahead of government in recognizing the value of renewable energy and energy efficiency.

That is perhaps more true in the Northwest than in any other part of the country, a fact that led Johnson to rally citizens of the region to lead on issues of climate and clean energy because that’s what the country expects of a region that has a history of creating something better.

But, how do we transition to a more highly integrated and efficient electric system?

The day’s final panel focused on the problem of transmitting energy from where it’s generated to where it’s needed, particularly wind and solar energy from Montana and Idaho that can best be used on large west coast markets like Seattle and Portland.

Moderator David Angell of Idaho Power led the audience through series of images mapping the various transmission lines that criss-cross the west and northwest regions of the country illustrating both the system’s complexity, but also its promise for being able to get power to where it needs to be. The discussion with panelists Nancy Kelly of Western Resource Advocates, Michelle Manary of the Bonneville Power Administration, and Keegan Moyer of Energy Strategies, identified a variety of barriers to heightened integration.

Those barriers begin with the multiplicity of players involved in transmitting and receiving energy.  Manary pointed out that the there are no fewer than 38 regional bodies in the west and Northwest that oversee parts of the transmission system.  Meanwhile, those who own large parts of the transmission grid, can’t dictate how the resource is allocated.  That must be done in conjunction with buyers and sellers who often hold contractual rights.  And the coordination must be done amidst an energy market in which, with recent surpluses generated by solar installations in California, the price of power literally falls below zero at times and upsetting business models.

Still, progress is being made.  The rise of the western energy imbalance market represents an important first step in coordination between states and utilities and discussions about improved regional planning are taking place.  Manary described the problem this way, “It’s not about physics, it’s about governance.”

Many of these conversations will be continued when we reconvene for the the Fall 2017 Clean & Affordable Energy Conference, which will be held on November 2 and 3 at the Seattle Hilton.  Click here for more information.  Hope to see you there.