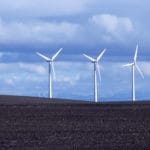 The growth of Northwest wind power continues to exceed expectations of just a few short years ago. Over 1,500 megawatts have been added in the last two years. Because BPA owns and operates three-quarters of the Northwest’s high-voltage transmission, the agency is playing a vital role in facilitating the development of this renewable energy.

“The wind resource connected to BPA’s transmission grid is growing at an astonishing pace,” said Brian Silverstein, senior vice president for BPA Transmission Services. “Even at this growth rate, our concerted efforts to meet the challenges associated with this growth and wind’s variability are working.”

Wind generation on BPA’s system surpassed the new milestone at 2:55 p.m. on Tuesday, Feb. 22, reaching a new all-time peak of 3,006 megawatts. BPA expects to have between 5,000 and 6,000 megawatts of this clean, emission-free, renewable resource connected to its system by 2013, several years ahead of earlier estimates.

The number of wind generation sites contributing to this record now total 35. These wind farms include more than 2,100 turbines primarily located east of the Columbia River Gorge. Even though most of the Northwest’s wind power is owned by private developers, they rely on BPA’s extensive transmission grid to move that power.

“Transporting wind energy across the Northwest and beyond is a critical part of America’s clean energy future,” said Silverstein.

Silverstein said that to accommodate 6,000 megawatts or more of wind, BPA is expanding and reinforcing the transmission system to support wind integration. The agency is exploring additional measures to balance wind more effectively, other sources of generation to balance wind and is developing partnerships with other utilities and the wind community to expand wind integration even further.

BPA also is developing a state of the art wind speed and wind generation forecasting system. The new system will forecast more accurately up to three days in advance rather than the previous forecast service that could only provide information one hour ahead. This information will put BPA in a position to make better, more cost-effective system management decisions.

BPA is a not-for-profit federal electric utility that operates a high-voltage transmission grid comprising more than 15,000 miles of lines and associated substations in Washington, Oregon, Idaho and Montana. It also markets more than a third of the electricity consumed in the Pacific Northwest. The power is produced at 31 federal dams operated by the U.S. Army Corps of Engineers and Bureau of Reclamation and one nuclear plant in the Northwest and is sold to more than 140 Northwest utilities. BPA purchases power from seven wind projects and has more than 3,300 megawatts of wind interconnected to its transmission system.