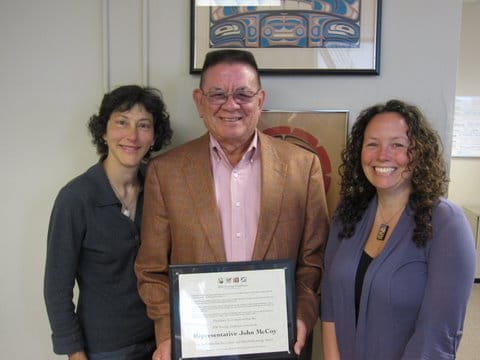 Washington State Rep. John McCoy (D-Tulalip) has been honored by the NW Energy Coalition Friday for his successful efforts to maintain the integrity of the state’s voter-approved Clean Energy Initiative, I-937, particularly during the 2009 state legislative session. Coalition policy director Nancy Hirsh (left side of photo) and former Coalition policy associate and lobbyist Carrie Dolwick (right) presented the award to Rep. McCoy during a brief ceremony in the Coalition’s Seattle office June 18.

The Coalition was a prime sponsor of I-937. Approved by voters in 2006, the law requires the state’s larger utilities to gradually increase the percentage of new renewable energy in their power mix and to take advantage of all cost-saving energy efficiency opportunities.

I-937 became eligible for legislative amendment in 2009. A host of often-competing interests proposed various modifications to the law’s renewable energy standards. As chair of the House Technology, Energy and Communications Committee, McCoy insisted that any amendments to I-937 not undercut the law’s intent: to develop energy efficiency and renewable energy resources, stimulate rural economic development, create jobs, protect against future price shocks, save money for consumers and help meet the state’s climate action goals.

“Washington believes in renewable energy and voted to make clean energy their future with Initiative 937,” McCoy said.  “Our communities know what’s at stake with our dependence on fossil fuels, and we need utilities working hard to innovate new energy sources.”

Thanks in large part to McCoy’s advocacy, I-937 survived the 2009 session intact. Attempts to change the law during the 2010 session found little traction. The NW Energy Coalition Board unanimously voted to recognize McCoy with a letter of commendation. It reads:

“WHEREAS energy efficiency is the lowest cost resource available and many renewable resources, such as wind power, already are cost-competitive with traditional power sources; and

“WHEREAS Representative John McCoy positioned Washington state to be a leader in clean energy development by tirelessly advocating to maintain the integrity of the citizen’s Clean Energy Initiative I-937;

“Therefore be it resolved that the NW Energy Coalition commends Representative John McCoy for his leadership for a clean and affordable energy future.”