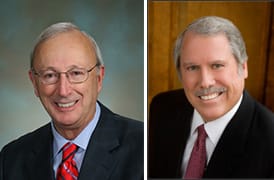 The Northwest Power and Conservation Council this month elected Washington and Idaho members to lead the four-state energy and fish and wildlife planning agency in 2015.

Phil Rockefeller, appointed to the Council in 2011 by then-Governor Christine Gregoire, was elected chair of the Council. In 2014, Mr. Rockefeller served as chair of the Council’s Fish and Wildlife Committee. The Council also elected Idaho member Bill Booth as vice chair. Mr. Booth previously served in several Council leadership positions including two terms as chair, in 2008 and 2009.

Before being appointed to the Council, Mr. Rockefeller, whose Council office is in Olympia, served 13 years in the Washington Legislature where he chaired the Senate Environment, Water & Energy Committee. Among his legislative accomplishments are the 2007 bill creating the Puget Sound Partnership, and legislation enacted in 2011 that transitions Washington State from coal-based power production. From 1981 to 1984, Mr. Rockefeller served as a policy assistant to former Governor John Spellman. He received his undergraduate degree from Yale University and his law degree from Harvard.

Mr. Booth, of Coeur d’Alene, was appointed to the Council in January 2007 by Idaho Governor C.L. “Butch” Otter and serves as a member of the governor’s cabinet. Mr. Booth is a former U.S. Air Force officer and senior minerals industry executive in environmental and government affairs. He received his undergraduate degree from the University of Idaho and a master’s of business administration while serving in the Air Force.