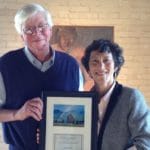 during SRA spring dinner May 7 in Boise

The NW Energy Coalition will present its annual Headwaters Award to Miller in honor of his tireless promotion of energy efficiency, renewable energy and economic development in Idaho and the Northwest. The award’s name refers to the headwaters of the Columbia River, and honorees receive a vial of water from the Columbia headwaters in Canada in addition to a plaque.

“Ken is a true clean energy hero,” said NW Energy Coalition policy director Nancy Hirsh, who will travel from Seattle to Boise to present Miller’s award. “He’s been a strong and successful Idaho voice for a clean and affordable Northwest energy future.”

One of Miller’s great triumphs was winning a moratorium on building coal plants in the state as part of a powerful campaign against new fossil- and nuclear-fueled power generation in the state. His work with Idaho’s Public Utility Commission to protect Idaho Power Co. customers is legendary; his regular Idaho Energy Update column is highly anticipated and well respected throughout the region.

He also worked as education and outreach coordinator and then policy coordinator for the Boise-based Winter Wildlands Alliance.

In recognition of his extensive service, the NW Energy Coalition board unanimously endorsed Miller for the Headwaters Award during its November 2013 meeting last November.

“The Alliance has valued the NW Energy Coalition’s leadership on energy issues in Idaho and throughout the Northwest for more than a decade,” Miller said. “Just about all clean energy advocacy in Idaho is somehow tied to our friends at the Coalition.”

To attend SRA’s spring dinner and see Miller get his award, visit www.snakeriveralliance.org or call (208) 344-9161. Members of the press are welcome at the event, but space is limited for the dinner. For more information on the NW Energy Coalition, visit www.nwenergy.org.