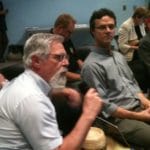 Community action agency leaders came to Seattle from as far away as Boise, Idaho, and Bellingham, Wash., to stress the inadequacy of BPA’s proposed low-income weatherization budget. Hans Berg of the Community Action Partnership Asso. of Idaho and others noted that BPA’s funding has not risen in five years. Meanwhile, their agencies are coping with waiting lists of up to several thousand households desperately needing bill-lowering weatherization services.

Low-income advocates say a doubling of the low-income energy efficiency budget to $10 million from $5 million is needed to start cutting into the backlog.

In fact, higher-than-projected achievements in recent years illustrate the abundance of efficiency opportunities available in the region to lower customers’ power bills. Plus, the more cost-effective energy efficiency utilities get, the easier it will be for them to stay within their allotments of the cheapest BPA power.

Bonneville’s proposed efficiency budget has another fatal flaw. It provides enough funding to meet public utilities’ share of the region’s official efficiency target, but only if the utilities do considerable self-funding of the projects. NW Energy Coalition executive director Sara Patton recalled what happened the last time Bonneville put its faith in self-funding: energy efficiency acquisitions plummeted. Many small utilities have already said they can’t possibly self-fund efficiency programs due to their financial situations.

And, Patton stressed, BPA has no backstop should the region’s utilities fail to meet the regional target – a highly likely outcome given BPA’s budget plans.