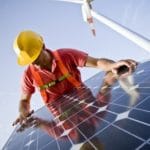 Washington’s renewable energy sector today announced a milestone in economic development for the state. Capital investment to date in Washington wind, solar, geothermal and biomass has exceeded $7.9 billion, according to data released today by Renewable Northwest Project, a regional nonprofit advocacy group and member of the Coalition.

A wide range of business and community leaders hailed the milestone, noting the significant statewide economic development the investment is creating as Washington moves to resolve its budget crisis, diversify its energy mix, and protect air quality and the environment.

“This is a pivotal time for economic recovery and environmental protection, and Washington’s renewable energy resources are delivering the solutions we need,” said Rachel Shimshak, executive director at Renewable Northwest Project.

The investment landmark was announced just as the Washington State Legislature is considering changes to the renewable energy standard in the state’s voter-approved clean energy law, Initiative 937. Passed in 2006, I-937 advanced Washington’s role as a national renewable energy leader, attracting renewable industry businesses and capital investments to the state. The future of I-937 is uncertain, just as uncertainty surrounds regional transmission policies and federal renewable energy policies, such as the Production Tax Credit, which will expire unless extended.

U.S.-based manufacturers and their employees are benefiting from the renewable energy investments in Washington. The Katana-Summit wind turbine component manufacturing facility in Ephrata employs 150 people. The solar photovoltaic manufacturing sector has brought more than $1 billion in capital investment to the state since 2006 and employs more than 720 full-time workers.

REC Silicon brought as many as 1,500 jobs to Grant County during plant upgrades and expansion. The company is the county’s largest single taxpayer at $1.3 million a year in state business and operations taxes.

Despite the lagging economy, rapid growth of renewable energy projects in the Northwest helped the Port of Vancouver to retain jobs through the recession, due largely to logistics handling for wind energy parts.  The Port handled over 3,300 individual wind turbine parts in 2011, and wind energy business accounts for a significant amount of the Port’s annual marine revenues.

“Renewable energy growth has meant business for the port, work for longshoremen and activity for the transport sector,” said Alastair Smith, senior director of marketing and operations at the Port of Vancouver.

Vestas, a wind turbine company, provides 62 full-time, family-wage jobs at service site offices in Ellensburg and Dayton. George Vandehey, site manager for Vestas at the Wild Horse Wind Farm in Ellensburg, described associated jobs: “As I look at the wind turbines each day, I see manpower – not just wind – at work. Our technicians maintain the machines, just as skilled manufacturers built them.”

Vestas will supply turbines for the Palouse wind power project near Oakesdale, which is expected to create 100-200 jobs during construction and generate $12 million in property tax revenues over the next 20 years. Nearly all of the main components for the Palouse project will be manufactured in the USA at Vestas’ production facilities in Colorado.

In addition to the $7.9 billion capital investment, property taxes paid by renewable energy companies have revitalized local school districts and other public services across the state. In Kittitas County, each wind turbine represents a $4,500 annual boost to the county’s general and road funds. The local school district’s assessed value has doubled.

The renewable industry presence also supports the culture of Klickitat County. In 2011, the Maryhill Museum of Art received $256,000 in lease payments from Cannon Power Group, which operates 15 wind turbines on museum-owned land. This revenue supports the art museum’s $1.3 million operating budget. The wind developer also provided in-kind support for the Mary and Bruce Stevenson Wing, opening in May, plus a $75,000 cash donation toward the project.

“Renewable energy resources — paired with optimal efficiency — offer the best choice for healthy economies, communities and the environment,” Shimshak concluded. “We are proud of the progress that Washington has achieved and urge state leaders, federal policymakers and citizens to expand Washington’s clean energy leadership and the benefits it brings to our region.”