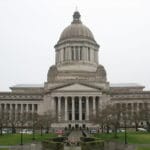 Olympian Editorial: Do not compromise the Energy Independence Act

When a state senator doesn’t understand the purpose of a law, or the citizens’ initiative that created it, she might see no harm in reversing it. That must be the explanation for Sen. Sharon Brown’s (R-Kennewick) latest attempt to eviscerate Washington’s Energy Independence Act, Initiative 937.

Brown introduced a bill that would change the 2007 law to count incremental energy created by hydroelectric efficiencies toward the renewable energy goals for power utilities. Her Republican Senate colleagues passed the measure 28-20 along party lines.