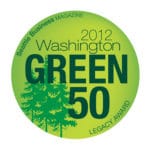 The NW Energy Coalition took home the Legacy Award from the Seattle Business magazine’s Green Washington Awards dinner Nov. 1 in Seattle. Executive director Sara Patton accepted the honor on behalf of the Coalition and its more than 110 organizational members.

“We’re excited to receive the Legacy Award, recognizing our 31 years of melding the interests of businesses, utilities, families and the environment to build a clean and affordable energy future,” Patton said. “And we’re still advancing energy efficiency, new renewable energy, consumer and low-income protection and restoration of wildlife affected by the regional hydropower system.”

Seven individual awards were given in such categories as manufacturing, architecture, clean tech, construction and health care. Finally, Green Washington judges conferred the Legacy Award to the NW Energy Coalition.

The Coalition and other winners are featured in the November 2012 edition of Seattle Business. Visit seattlebusinessmag.org for more information.

The Energy Activist provides coverage and updates on current developments in the continuing push for a clean and affordable energy future.

You have successfully subscribed to the newsletter

There was an error while trying to send your request. Please try again.