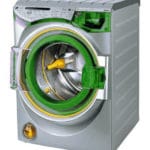 New Clothes Washer and Dishwasher Standards Will Save Consumers Loads of Money, Protect the Environment

That means lower utility bills for consumers and big environmental benefits for us all – without sacrificing any of the cleaning performance consumers count on, according to a coalition of consumer, energy and environmental groups.

“Consumers and the environment both come up big winners with these new national standards,” said Steven Nadel, Executive Director of the American Council for an Energy-Efficient Economy (ACEEE). “These common-sense standards will save loads of energy, water, and money.”

The new standards are based on a joint recommendation developed by clothes washer manufacturers, consumer groups, energy and water efficiency advocates, and environmental organizations. The groups designed their recommendations both to be highly cost-effective for buyers and to preserve consumer choices such as between top- and front-loading clothes washers.

According to an analysis by ACEEE and the Appliance Standards Awareness Project (ASAP), consumers of new clothes washers can expect to save between $400 and $600 in lower energy and water bills over the lives of clothes washers that meet the new standards compared to today’s basic models. Buyers of new dishwashers will save about $100. Lower utility bills will offset additional upfront costs within about two years for both products.

Based on the ratings published by Consumer Reports magazine, products sold today that are compliant with the new standards are among the best on the market. As a result, consumers will benefit from these substantial savings without giving up any cleaning performance.

“These efficiency improvements for clothes washers and dishwashers will save consumers money and provide consumers with more efficient options that are still affordable and high-performing,” said Shannon Baker-Branstetter, Policy Counsel at Consumers Union.

“Once again, these updated standards show that energy efficiency advocates can find common ground with manufacturers and consumer and environmental organizations on making leading-edge technology the ‘new normal’ to benefit every consumer in the country,” noted Kateri Callahan, President of the Alliance to Save Energy. “By acting on the consensus recommendation of these diverse organizations, Secretary Chu and the entire team at the Energy Department has delivered big benefits for consumers and the environment.”

President Ronald Reagan signed the original appliance efficiency standards into law in 1987. Today’s update marks the fourth time national standards for clothes washers have been improved and the third improvement for dishwashers. As a result, energy use to complete a load of laundry has declined by 65 percent since the 1980s. Water savings have grown with the most recent standards: a new top-loading clothes washer will use about 20 gallons of water to clean a load of laundry compared to 40 gallons used by some new washers as recently as two years ago. Clothes washer water use accounts for about 20 percent of household indoor water use and the new standards will halve the water used for washing clothes for the typical household.

“Clothes washers will save households as much as 10,000 gallons -the equivalent of taking 250 baths-every year under these new standards,” said Ed Osann, Senior Policy Analyst at the Natural Resources Defense Council. “That’s good news for consumers, our environment and our economy-and especially for anybody with a house full of kids.”

Efficient clothes washers and dishwashers use better design and components such as motors and pumps to save on energy and water. According to ACEEE and ASAP, the savings from the new standards will add up to about 8 billion kilowatt-hours of electricity annually (which is equivalent to the annual electricity consumption of about 700,000 U.S. homes), reduce annual natural gas consumption by about 280 million therms (enough to heat a half-million U.S. homes), and cut annual water consumption by about 175 billion gallons (enough to meet the daily water needs of about three million Americans) by 2025. The standards will reduce annual carbon dioxide emissions by about 6.2 million metric tons, which is equivalent to the annual emissions of 1.3 million typical passenger vehicles.

Altogether, 55 categories of consumer and commercial products are covered by national efficiency standards. According to a report published by ASAP and ACEEE in March, the cumulative combined net savings of these existing standards from their inception through 2035 exceed $1.1 trillion and roughly 200 quadrillion Btus of energy-enough to meet the needs of the entire U.S. economy for two years. The new standards announced today add to these savings.

The American Council for an Energy-Efficient Economy acts as a catalyst to advance energy efficiency policies, programs, technologies, investments, and behaviors. For information about ACEEE and its programs, publications, and conferences, visit www.aceee.org.

Consumers Union is the public policy and advocacy division of Consumer Reports.  Consumer Reports is the world’s largest independent product-testing organization and has over 8 million subscribers. Visit www.consumerreports.org

The Natural Resources Defense Council is an international nonprofit environmental organization with more than 1.3 million members and online activists. Since 1970, our lawyers, scientists, and other environmental specialists have worked to protect the world’s natural resources, public health, and the environment. Visit us at www.nrdc.org

The Alliance to Save Energy is a coalition of prominent business, government, environmental, and consumer leaders who promote the efficient and clean use of energy worldwide to benefit consumers, the environment, the economy, and national security.

The Appliance Standards Awareness Project is dedicated to increasing awareness of and support for cost-effective appliance and equipment efficiency standards. Founded in 1999, ASAP is led by a steering committee that includes representatives from energy efficiency organizations, the environmental community, consumer groups, utilities, and state government.