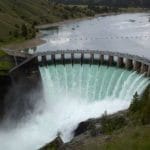 When NorthWestern announced the proposed purchase last September, it noted that adding 600 megawatts of clean hydropower would diversify its resource mix and protect its customers from current and future price risks — including regulatory risks — associated with burning fossil fuels.