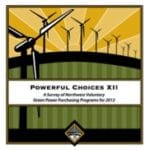 Austin, TX – Customer participation in voluntary green power programs increased by 13.1% across more than 60 utilities in the Northwest between 2010 and 2012, according to a new report released today from the Renewable Northwest Project.  RNP annually summarizes the progress of these programs in its report, “Powerful Choices.”  This growth exceeds previous years and demonstrates continued public support for clean, renewable energy amongst Northwest residents.

“The substantial growth in voluntary green power program participation shows that customers want more renewable power, and they are not afraid to show it, even during a slow economy.  Utilities and their partners are helping satisfy customers’ desire for cleaner power in the Northwest through these programs,” states RNP’s executive director Rachel Shimshak.

Adds Adam Capage, vice president of 3Degrees, which manages utility partnerships, “What’s remarkable about these growth rates is that they remain strong a full 10 years after most of these programs were first launched. When you keep reminding people they can support renewable energy, they keep deciding to do so.”

The report, titled “Powerful Choices XII,” was compiled using data from utilities, the National Renewable Energy Laboratory (NREL), and the US Energy information agency (EIA). The figures show that more than 243,000 customers now participate in green power programs, which is enough to power roughly 179,000 homes (approximate to all the households in Tacoma and Spokane, WA combined). This participation has prevented an estimated 2.8 billion pounds of CO2 emissions, equivalent to taking more than 268,000 cars off the road, or planting nearly 293,000 acres of forest.