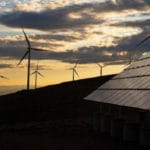 How clean energy is faring in Northwest state legislatures

This fall and spring, NW Energy Coalition staff have been working in state legislative sessions throughout the region to advance and especially to defend clean and affordable energy laws. Each legislature is different, but many of the issues being addressed are familiar ones:
•    Energy efficiency, including building codes
•    Renewable energy incentives and targets
•    Distributed generation options, particularly resident-sited solar power
•    Coal plants and climate

Defending I-937
Efforts in the region’s largest state have largely focused on protecting Washington’s signature clean energy law, Initiative 937. Although hugely successful in drawing renewable energy investments, creating jobs and community income, and reducing carbon emissions, I-937 is again the target of interests committed to rolling back its clean energy provisions.

We worked to introduce the one bill aimed at strengthening I-937. House Bill 2073 would require meeting new power needs post 2020 (when I-937’s new renewable energy target plateaus at 15%) with renewables, energy efficiency or storage and would allow utilities to count federal hydro upgrades and to use their owned hydro to meet some large loads. This bill did not get a hearing before cutoff.

Several bills rolling back I-937 are still alive, however. Senate Bill 5735 uses concerns about climate change as an excuse to substitute investments in loosely defined transportation projects, fossil fuel programs and carbon sequestration for I-937’s renewables and efficiency goals, cutting utility compliance investments by 75%. After passing the Senate, SB 5735 awaits action in the House.

Bills that would have counted all existing and future hydro as an eligible resource (thus completely voiding the renewables standard), offered dubious alternative compliance options, and added nuclear and other non-renewable power sources to the mix did not advance.

Solar
Most of the action on solar now centers on HB 2045, a heavily reworked combination of three bills addressing utility concerns regarding rising distributed generation on their systems, net metering limits, tariffs or fees on those installing solar resources and other issues. While not approved by its House policy committee before cutoff, HB 2045 has been declared necessary to implement the budget (NTIB) and thus could still come up later in the session.

Several other bills were introduced and failed to advance, though pieces of them have appeared in various incarnations of HB 2045.

One of the main bills survives, though in altered form. HB 1100 originally called for adoption of California and Oregon efficiency standards for battery charging systems, some light bulbs and HVAC filter systems, together expected to reduce Washington energy use by 34 average megawatts. After passing the House on a party-line vote, it was amended in the Senate Energy, Environment & Telecommunications Committee to include only the battery-charging standards. The stripped-down bill awaits Senate floor action

HB 1278, a priority bill for the Energy Efficiency Roundtable (EERT) that would strengthen building owners’ energy use benchmarking requirements, made it out of its House policy and fiscal committees but did not reach the floor by cutoff. A similar fate befell another EERT initiative, HB 1843, which would have allowed local jurisdictions to grant property tax exemption for energy efficiency building retrofits or highly efficient new construction.

Building and energy code
The Coalition has been fending off industry attacks on the state’s Building Code Council and the code amendment process.

SB 5185 would stall energy efficiency progress by doubling the length of the code update process, the bill passed its policy committee but did not receive a floor vote thanks to strong opposition from labor, cities, climate and energy groups and other stakeholders. Another, SB 5804, aimed at limiting and erecting hurdles to energy code amendments, passed the Senate but did not advance out of the House policy committee.

Unfortunately, a bill addressing the Building Code Council’s inadequate funding has not advanced. The legislature has not adjusted the fees that fund Council operations since 1989. HB 1234 would raise building permit fees a few dollars and index them to inflation. The bill could come up during budget deliberations.

Other topics
Electric vehicles (EV): A bipartisan bill allowing regulated utilities to install and earn an incentive rate of return on EV charging infrastructure behind a customer’s meter awaits Senate floor action after passing the House (by 71-27) and the Senate policy committee. The state Utilities & Transportation Commission would regulate ratepayer impacts, consumer choice, and system impacts. HB 1853 has green, labor and utility support.

Closing Colstrip: Negotiations continue on a potential plan to close the Colstrip, Mont., coal plant co-owned by Coalition member Puget Sound Energy. Still in play are SB 5874, which passed the Senate as a study bill, and HB 2002, a placeholder until PSE provides final language, which passed two House committees and now sits in Rules.

The Oregon session is not as far along as our other states. Several clean energy related bills have had hearings, but none has advanced very far as yet.

Large user energy efficiency: The Coalition and the Citizens’ Utility Board testified in favor of HB 2946 at a March hearing before the House Energy and Environment committee. A cap on large user energy efficiency could prevent the Energy Trust of Oregon from achieving cost-effective conservation in Portland General Electric’s service territory. This bill would fix the problem.

Coal to Clean: At a Senate Environment and Natural Resources hearing on SB 477, utilities and clean energy advocates agreed that Oregon should discuss phasing out the coal power coming from out of state. (The state’s sole remaining coal plant in Boardman will transition off of coal by 2020.) We will work to continue the conversation as part of our mission to maximize clean energy regional progress and minimize costly coal investments.

Energy efficiency/renewable energy tax credits: A pair of tax credit extension bills, HB 2447A (energy efficiency projects) and HB 4778A (alternative energy) passed out of the House Energy and Environment committee and have just had hearings in House Revenue.

Solar: HB 2632A, which directs the state Department of administrative Services to establish an incentive program for solar projects, passed the House Energy and Environment committee and was referred to Ways and Means. Other solar bills that have been heard in House Energy and Environment include HB 2745, which extends the state feed-in-tariff program, and a solar gardens bill, HB 2941.

Clean fuels: While not something we worked on, no summary of clean energy legislation in Oregon would be complete without mentioning the passing of Oregon’s Clean Fuels Bill, SB 324.

HB 188 attempted to increase the time a customer-generator could carry over unused credits. It was tabled in House committee.

HB 192 attempted to increase the net-metering cap from 50 kilowatts to 1 megawatt. It also died in House committee

SB 134 would have allowed aggregate net metering so a customer with multiple meters on the same or adjoining property could use credits from one meter to offset electricity use from another. This bill promised profound benefits to Montana’s agricultural community, but it died in Senate committee.

SB 182 would have allowed multiple accounts to participate in an off-site net-metered system, providing proportional credits for each account. Utility customers lacking adequate space or solar/wind resource could thus participate in net metering. This bill also died in Senate committee.

Senate Joint Resolution 12 directs an interim committee to study net metering costs and benefits. The Coalition believes the state Public Service Commission is better equipped to perform the analyses needed to quantify costs and benefits. We will continue to be engaged on SJ 12, however.

Universal System Benefits
SB 150 increases from 35% to 50% the share of NorthWestern Energy’s USB funds directed to low-income programs. The change, which applies only to NWE, reduces funding for the other two USB public purposes – energy efficiency and renewables. Reflecting an unfortunate national trend, opponents of distributed generation used the bill to falsely pit the low-income community against clean energy progress. That forced the Coalition and MEIC to testify against this funding change, despite our long-term and enduring advocacy in support of low-income interests. Legislators were not persuaded and passed the bill.

Renewable portfolio standard
SB 114 was the third attempt to include all hydro (including decades-old legacy hydro) in Montana’s renewable portfolio standard. This bill would have essentially drowned the RPS in credits, negating its purpose of promoting new renewable generation. NWE opposed the bill in past sessions but has since acquired its own dams and now supports inclusion of all hydropower. Gov. Steve Bullock once again vetoed the bill.

Other topics
SB 402 is a shortsighted attempt at a pre-emptive strike against Puget Sound Energy and Washington state for potential legislation aimed at closing the Colstrip, Mont., coal plant. The bill assesses punitive damages on any utility that plans to shut down Colstrip and grants the Montana Public Service Commission power to regulate utilities that provide no service in Montana. The Coalition unsuccessfully worked against this bill in the Senate. It is currently sits in the House.

SB 249 updated criteria for energy performance contracting and is poised to pass.