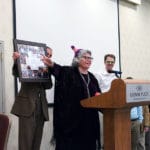 The Nov. 8-9 NW Clean & Affordable Energy Conference in Seattle was one of the most popular and engaging Coalition sessions in years. Upwards of 150 people attended Friday’s program, which uniquely focused on a single subject: how all communities can thrive as energy efficiency, the smart grid and lower-cost local power tempt consumers off the grid.

A similar number attended a rousing, laughter-filled celebration of Sara Patton’s 20years as NW Energy Coalition executive director. Many stayed around for Saturday’s inspiring tour of the world’s greenest commercial building, the Bullitt Center, and to vote acceptance of a new organizational member during the full board meeting.

Colorado utility regulator Ron Binz, “the man who should have been chair of FERC” (the Federal Energy Regulatory Commission), kicked things off with a keynote speaker on the changing role of electric utilities. He was followed immediately by a star-studded utility panel including Bonneville Power Administration acting administrator Elliot Mainzer and leaders of Seattle City Light, Portland General Electric and the Emerald People’s Utility District.

Ensuing panels focused on emerging clean energy technologies and the role of regulators and elected officials in reforming the utility regulatory model. A panel of clean energy advocates weighed in on the costs, benefits and barriers to achieving a more decentralized energy system. SunPower Corp.’s Tom Starrs’ presentation stressed “The Inevitability of Technology.”

Many long-time Coalition conference goers ranked Friday’s conference among the best, if not the best they’d ever attended. They cited the focus on a single, currently critical subject and the diversity and expertise of the often-highly placed presenters.

On Friday evening, a wonderful crowd of clean energy leaders came out to celebrate Sara Patton and her 20 fabulous years as executive director of the NW Energy Coalition. Many surprises were in store for Sara and the crowd as Ralph Cavanagh on the Natural Resources Defense council, LeeAnne Beres of Earth Ministry, and Coalition policy director Nancy Hirsh regaled attendees with triumphs and amusing anecdotes from Sara’s two decades of leadership for a clean and affordable energy future.

MC Jim Morton of Montana’s Human Resources Council had some humor up his sleeve, as well. He called several guests out of the crowd to share stories about Sara including a reference to Watermelon pajamas. Coalition staff members led by Alicia Healey serenaded with special lyrics to the tune of “Roll on Columbia.” Attendees laughed (and cried) all night.

The event was a great success in terms of raising funds for the clean and affordable energy work ahead. Thanks to those who celebrated and to all who give so generously of their time and money!

Members at Saturday’s full board meeting, for the first time led by board chair Jeff Bissonnette of Oregon’s Citizens’ Utility Board, took care of regular Coalition business, considered awards nominees, and unanimously accepted a membership application from Clean Energy Works Oregon. The latest addition brings the Coalition’s organizational membership to 112.

Board members also opted to hold next spring’s NW Clean & Affordable Energy Conference and board meeting in Missoula, Mont., May 2-3. The next fall conference will be Nov. 7-8, 2014, in Oregon. Be sure to save those dates now!