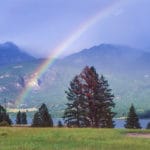 Zelenka was an early proponent of solar development in Oregon and a founding member of the Renewable Northwest Project (now Renewable Northwest) in 1993. He went on to lead Emerald People’s Utility District in Eugene, Ore., for 21 years, focusing on new renewables and energy efficiency development and representing the utility on the NW Energy Coalition board. He’s now a Eugene city councilor and serves on the state’s Global Warming Commission.

Nelson, of Shoreline, Wash., recognized the potential of solar energy nearly 50 years ago when solar installations were costing $100 a per watt. He knew that with the right policies and investments, costs would plummet toward $1 per watt. He was right.

Over the years, Nelson worked for state of Washington on renewable energy, led the Northwest Solar Center and now teaches renewable energy courses at Shoreline Community College. He’s been a mentor to young advocates and a leader by thought and example to the NW Energy Coalition.